As Ben’s younger (and only) sister, I’ve known him for a fair time, and something I’ve always known, in varying degrees, was that he loved the tv more than me. Throughout our childhood I’ve been reminded of this fact many times; my favourite example is when we were watching Lord of the Rings as a family. What must be noted is that I was four or five and rather bored. The floor in that house we lived in then was marble, and we had these little carpets that I decided were fun to slide on, due to my boredom, until I slipped and slammed my face on the floor, knocking a tooth out, and making another so loose it fell out later that day. After my parents sat me down and shoved a towel full of ice against my now bleeding gums, my brother looked at them expectantly and said ‘Can we finish the movie now?’

And you would think I should have been as mortified as my parents when they both almost yelled ‘no’. But it was just a reminder of something I knew from when he’d stage me about in our small plays at home; Ben just loved movies more than anything, he loved directing more than anything he wanted was to watch as many films as possible so he’d know how to become a film director.
And now, ten years later, my older brother that I would hand the tv remote to because I knew there was no point in arguing, is in his second year at university, and on the way (fingers crossed) to making the dream he thought up – into a reality.

One of these ‘dream-realities’ is the short films he’s made, one which is more recent is titled ‘Once Married’, which is available for viewing on YouTube, here: Once Married (2012, Dir. Ben Rider) 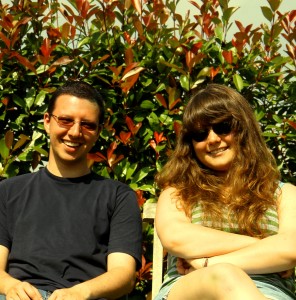 The short depicts a couple who meet at a restaurant to have a meal and it is later revealed to the audience that this meeting is so that they can exchange divorce papers. Was there any inspiration for the storyline that you came up with?

The other source would be our shared childhood, watching our parents as a couple, and the challenges they’ve had to face as we’ve moved around the world. Obviously though, any trace of our family has being removed.

What was the artistic inspiration?

The stylistic inspiration was somewhat derived from Wong Kar Wai, and ‘My Blueberry Nights’ in particular. The colour hues and the easy nature in which our characters slip in and out of those stylistic tones is something that interests me. It is however quite staged in its creation. And I tried to balance it out with accidental and minimalist editing choices, very much stolen from the likes of Gus Van Sant and Sofia Coppola.

If there were 5 things that you learnt while making this that you will keep in mind in future opportunities, what would those be?

Most definitely learning to trust your actors. Prior to this short I hadn’t worked with professional actors, and I decided that it would be best to attempt the so-called ‘Woody Allen’ approach, and step back when it came to controlling the actors. As our lecturer warned, they had studied the material and came prepared.

On a side to that, I’d say that I learnt to pursue a better form of filmmaking, as in actually attempt to separate myself from the easily reproduced styles found in short films made in universities and by amateur filmmakers. With this I also had to learn to say no to all creative suggestions, something I’ve continued with my first professional short film which is in post-production at the moment.

I guess another aspect would be the simple act of trusting my instincts and material.

Babysitting every aspect of the film process during the production is another skill I’ve become accustomed to, and one I had to step back from as the project unfolded, I had to let some accidents happen; and ultimately some allowed the film to improve, such as the last minute changing of locations.

Were there any major obstacles you had to overcome?

Finding a restaurant inLondonwhilst the rest of my group from uni were on holiday aboard was probably the most grilling of all the obstacles, because I knew at that junction that if I didn’t manage to do it, that’s it. Over.

Another one, which hasn’t really been overcome, was the misuse of equipment. I’ve come to accept it though – the short was never going to be perfect!

There’s a certain beauty in it though, somehow it feels a little retro in its eventual style. Almost like it was made in a pre-digital era. I like it for that.

Another aspect was the staff at the restaurant, which decided to check up on us constantly, I remember this one great take we were shooting which was interrupted with the loud questioning of the nearby waiter: ‘Are they filming over there?’

It left us all in stitches.

I suppose the last obstacle was simply seeing it completed on time, and the anxiety of being the only group in our year that was working off an original script, one which was scrutinized heavily by our module leader, instead of simply doing what everyone else was doing, which was remaking a scene from a classic film.

When you look back on the project, what do you think?

It now has a sort of sentimental feeling for me, as it is no longer my latest project. I have made a short since as you know, and have started working on two music videos I have to direct. And then there’s the feature which is shaping out.

I suppose what I’m trying to say is that it no longer feels so relevant to me. I can watch it and admire it for what it was, how it was made and what I and everyone involved experienced through. I love the way film making allows the preservation of those kinds of memories. I can revisit it now, and regardless of what went wrong, and I can see some element of what I was trying to make.

When you watch movies since having gone though the process of filmmaking, does it change the way you ‘see’ movies?

I’ve learnt to admire the simpler side of filmmaking. I was always a big fan of independent films, especifically because of their broad emotional spectrum. But as a filmmaker I’ve found that when I return to smaller films I realise how difficult it is to filter your material to its core.

Everyone wants to create diverse emotional films. I doubt anyone sets out to achieve anything else in any art form. But to filter out all your extra baggage, of musical cues and convoluted editing processes, making sure that the raw material is present is very difficult.

That’s why my favourite moment in ‘Once Married’ is the end. That last minute alteration of the script we had to make due to running out of time results in a slow, long handheld take of Jack returning to the restaurant, the closest thing we came to what I would think as ‘good’ filmmaking, it was raw and edgy.

Another moment would be when we made the actors get under a sheet in order to get the whispering voiceovers. They looked ridiculous in the middle of the restaurant, and they knew it too. But they were really great sports about it, and the short is all the better thanks to it. That’s the exact moment when I really decided, this is what I want to do.

In reality it hasn’t really changed the way I watch films though, I still get swept up in most film’s world, transported and entertained. I can analyse film, but it never alters the simple facts: is the film good or bad, is it entertaining? Am I bored?

I hope people viewing my work consider the same things rather than attempt to work out what I did and why; all that matters is whether it works or not.