If we stop speaking words, what do we find? The voice of God?

When starting a similar lecture in the past Diarmaid MacCulloch said he had been tempted to stand for the duration without saying anything and then head home with his fee. Instead the author of A History of Christianity began his talk by announcing he had always been fascinated by what history doesn’t say. I felt this left him with quite a large topic to get through in the next fifty minutes or so. Son of a Suffolk parson he grew up appreciating the positive and life-changing silences of Church but also experiencing the silence extended towards his homosexuality. There are good silences and bad silences and in this talk he looked at silence in Judaism, Christianity and the life of Christ before mentioning modern day negative silences. Being gay he felt he had been given observer status in society and had become addicted to telling the truth. 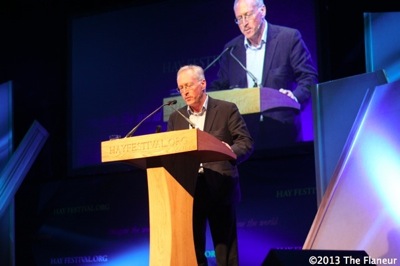 Perceptions of silence and attitudes towards it have changed. Silent prayer was not originally seen as good. In the first chapter of Samuel Eli sees Hannah praying silently and accuses her of being drunk. Silence is controversial and in the New Testament Jesus embraces it. Throughout the gospels he is often said to be escaping crowds. But Jesus’s silences are purposeful and even at his trial he remains silent. Yet the early Christians did not embrace this part of his example. Paul’s letters show that they sang, worshipped and quarrelled.

When silence is embraced, as in some monasteries, it has a profound effect on what can be communicated. Monks who do not speak use signs, and there are no signs that allow for spite or hate. Silence directly restricts the evil that men can communicate. MacCulloch told that in the Cluny sign language the sign for a secular book was a scratch behind the ear – like a dog scratching itself. This was because reading a secular book was seen as being no better than being an animal!

Monasticism is in neither the Old or New Testaments. So where did it come from? MacCulloch described the route it took from India to Syria and beyond. The Syrians were great traders and they brought back monasticism along with their profits. Once monasticism arrived it stayed for 1000 years. But in the 16th century Protestant reformation the monastic silence disappeared. Christianity went noisy. Congregations demanded hymns, sermons and psalms.

There are also the dark silences of shame. MacCulloch identified three main areas – clerical child abuse, the Nazi holocaust and slavery. But Christianity has been built on many good silences. To stop speaking words is an interesting idea in this modern world of constant noise. Many people are finding the benefits of retreating from society, of switching off their phones and computers. Christian history demonstrates that if we stop speaking then maybe we have more chance to hear the voice of God.