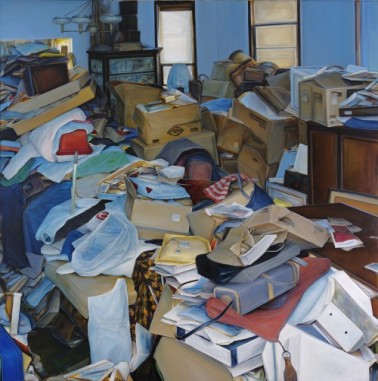 There is something strangely inviting about Karla Marchesi’s cluttered interiors.  I imagine the must of  old books and out of date newspapers blended with that smell that old people have… I picture myself diving into the rooms depicted, and rummaging about with wide eyes, desperate to discover something – anything. Within each painting, lies some mysterious truth or hidden delight, answers to questions, and questions to answer.

I was left with such curiosity after viewing Karla’s recent exhibition To Have and To Hold, at Beam Contemporary in Melbourne that I couldn’t resist an interview with the artist.

HH: Hi Karla, congratulations on your exhibition. It spoke to me in so many ways. Some really uncomfortable truths are revealed in your work that I’m sure many can relate to.

What is your relationship to the spaces that you have depicted? Are they real or imagined?

KM: The interior scenes depicted in my recent works result from trawling through the internet, in search of chaotic, compelling piles of domestic matter. From my database of found images I construct compositions using Photoshop, then lose and find objects in the process of painting. In this way the spaces I depict are both real and imagined.

Earlier in my career my paintings relied heavily on autobiographical references. I depicted places,people objects known to me.  I feel my current works have a similar psychological import, though personal references are now more subliminal.

HH: My father has recently been hired by the local hospital to de-clutter a patient’s home.  Sometimes I think that this is something I would really enjoy doing. I love organising things, I’m fascinated by the way people construct their habitat and at the end of the day, it’s a totally legitimate way to feed my curiosity, no?  But on the other hand, I’m admittedly terribly indecisive and would find it really difficult to throw away things that someone may be unknowingly but deeply attached to.   Furthermore, I do hate to waste, and often like to envisage new and innovative uses for tired, old objects.

How do you think you would you go if hired to de-clutter a stranger’s home?  Is it something that would excite you or daunt you?

KM: Coming from a family of moderate hoarders, I’d embrace the task. I have been brought up to reuse,refashion, recycle or redistribute.  As a kid I distinctly remember the joy of hunting for treasure in my family home and the homes of relatives. Our family keeps everything from years past.  There was always a new cupboard, box or drawer to investigate.  I guess it’s through this kind of child-play we discover and connect with a history that occurred before our existence. Being from such a big family (I’m the youngest of seven) I constantly felt like I was playing catch up on what had gone on before me.

However there is a different sensibility associated with objects belonging to people near the end of their life or diseased.  These objects transform into relics and function as proof that we once existed.

Some years ago I witnessed my partner at the time being given the task of sorting through his paternal grandfather’s and maternal grandmother’s respective deceased estates in lieu of rent. This process of transition, making a familiar space one’s own, in addition to unearthing various treasures, really struck me.  This time inspired the 2008 body of work entitled ‘Dwelling’ and led me to portray the human figure in its absence for the first time.

HH:  Nowadays de-cluttering seems to be a common theme on shows like A Current Affair. Even more recently entire lifestyle programs such as Hoarders and Enough Already have been produced. What are your thoughts on this?

KM: For some American based programs I can’t help but feel that being exploited for entertainment may be the only way some people are able to receive treatment for their psychological conditions.  That doesn’t sit well with me.

Although somewhat hypocritically, I can say that I’m not compelled by such imagery. I was transfixed by media reportage stemming from the immediate fallout of the Global financial crisis in America. As many citizens lost their homes there was a disturbing trend of people, totally shell-shocked by their experience, upping and leaving their dwelling with few possessions. Houses were left full with once treasured belongings. I witnessed one video account where the occupants left with half eaten breakfast on the table and other household items remained unmoved.

At this time ‘Trash-out’ repossession businesses thrived. This process involved employees indiscriminately throwing out deserted property. It seemed like such unnecessary waste, like doubling the tragedy. Surely they have Goodwill stores.

HH: You would imagine so. The initial reaction of many when confronted by the types of interiors that you depict, can be really critical. Often attitudes of superiority are revealed. However, there can be a lot more than simple “laziness” hidden behind much clutter. I am fascinated by the psychology of it all.

An electrician friend of mine was once doing some wiring in a house. He discovered a room referred to as “the dog’s room” by the owner.  Barely able to open the door, the room was floor to roof with clutter, much of it belonging to the former dog. This explained the name of the room.  As too did the pile of dog’s bones, that is, its skeleton that was found wrapped in a blanket hidden amongst the clutter. You can imagine the stench.

Do you have any horror stories?

KM: Thankfully no horror stories that I’ve personally experienced, though I did come across articles reporting on deaths caused by piles of hoarded material collapsing on occupants.

HH: That is certainly something to be wary of.

Is there anything that you collect?

KM: I have a thing for vintage broaches and nanna clip-on earrings, but I’d hardly call it a collection.  I do have a strong emotional reaction to objects though, especially those crafted with impeccable design and consideration, those you empathetically want to pick up to hold, or the beauty embodied in raw materials itself. I tend to be too pragmatic to collect items which involve financial outlay.

I have engaged in some curious experiments in collecting.  Admittedly most find this story quite unpalatable: During my honours year I collected all the fingernails I bit off whilst writing my honours thesis.  I still have the vial somewhere.

Recently I’ve taken to collecting the detritus from my painting practice, namely that which didn’t make it to the paintings surface, but was part of the process. These have formed a number of experiments surrounding me in the studio.

HH: You raise a good point about collecting and finances. I’m sure this can be very straining on many. Yet somehow even the least likely purchases manage to be justified.  Humans are too smart, or our fetishes too strong.  I recently met a guy who spends over $1000 USD on Chicago Bulls merchandise a year. “Investment” he says. But that’s a whole other story!

Have you ever scored anything great on hard rubbish collection day? I have two irregularly shaped wooden frames. They are not picture frames.  I don’t actually know what their original use was, but I would like to make them into a coffee table, or mirror of some kind.  I also picked up a great clothes drying rack.  At least I have been making good use of the latter.

KM : I actually live in a region that doesn’t do hard rubbish collections, though I’m two streets away from Brisbane City Council’s boarders which does.  Can’t say I’ve ever been tempted to pick anything up.

I have often stopped and photographed piles though. Early in my visual research for recent collections I was drawn to hard rubbish for their symbolic quality. I felt empathy for these highly visible, discarded objects. These once private, useful and personal objects lying cast aside seemed to me like a very public and hurtful breakup.

Admittedly this coincided with not a great time for me personally.

HH:  There’s something quite poetic about it isn’t there? One of the most common items I see discarded on nature strips are old mattresses, often double, even queen sized. In a way they do represent the end of an era for somebody.  I suppose I could be more optimistic and assume there is a comfortable new mattress inside. Yet it is more often than not that sense of nostalgia that seems to override…

I am particularly drawn to one of your works, ‘More Than Ever’. The work includes a television box, perhaps discarded, perhaps never opened.  On the box is an image of the television that was purchased, showing a beautiful green forest scene. It is the only sign of the natural world in this darkened room. I imagine the curtains are closed to hide the mess, yet this also acts to distance the inhabitant from the natural world.  I see it as a reminder of the threat that our over-consumption poses to the environment, with that distance ever increasing for each of us as our green spaces continue to dissipate.

In your work do you find that you are more fascinated by the social or the environmental message that is projected? Is it the psychology behind clutter, (ie, how does one get to this point?) or is it this notion of over-consumption on a greater scale and the effects this is having on our environment that you are more concerned with? Or something different again?

KM: To be honest I’m completely solipsistic. For me my work is very personal. My paintings are embedded with how I feel about myself at the time. Of course external ideas develop in the process, but it’s always the beginning.

In this way I employ the social and psychological aspects of clutter and hoarding as metaphors in my work to reflect on experiences and conditions of contemporary living.

HH: Despite the personal aspect of your work, it is the visual familiarity of the scenes you depict that make them so accessible to a wide audience. There’s a real tangibility to each.  We have only  but touched on a few of the many angles from which your work could be discussed. The infinite number of potential dialogues about the self and society surrounding your work is what makes them so appealing to me.

What is next on the cards for you?

KM: I’m still very much compelled to explore the formal and metaphorical possibilities embodied in arbitrary piles of domestic matter. I am particularly interested in formations such as piles, loose-stacking and constructions which give temporary form to common domestic materials and belongings.

I find the way items are simultaneously hidden and revealed fascinating.  This allows for passages of representational illusion and abstract disillusion to function side-by-side. I think this has great painterly potential.

Though to answer your question more directly I have a show in Brisbane at Heiser Gallery opening on Friday 1st June and in August I’ll be jetting off to undertake a 6-month studio residency in Berlin.

HH: Sounds great, I look forward to seeing the outcomes! Thanks for your time Karla and I wish you all the best.

For more information about Karla Marchesi and her work, please visit: https://www.karlamarchesi.com