Tim Hetherington was a photojournalist who died on the front line in Libya in 2011. In 2013 an award was given in his name for the first time at the Sheffield Doc/Fest. His mother spoke at the ceremony, even though coming to Sheffield had been difficult as it was the place where she had last seen her son alive. The award will be given annually to filmmakers working to expose social injustice. Presented by Dogwoof and Doc/Fest?? the award celebrates the life and legacy of Hetherington, whose objectives as a filmmaker were to highlight the plight of people so often ignored by the world and mainstream media. 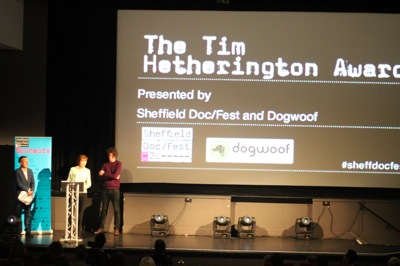 A cash-prize of £1,000 was presented to the film in the festival that best reflected Tim Hetherington’s legacy. The film was selected by a jury incluing Tim Hetherington’s mother, Judith and representatives from Doc/Fest and Dogwoof, the UK distributor of Tim’s Oscar-winning Restrepo.

The 2013 Tim Hetherington Award was given to The Square (Al Midan) directed by Jehane Noujaim.