“You lived in New York?  I was in New York in the mid 50’s, and there I lost my virginity to a young German man who ravaged my body!”

Ok.  So, it is not what you typically expect to hear in a lovely French accent from someone you’ve just met a few minutes ago.  But, there’s a good chance you will hear it at Les Deux Magots in Paris.  This café is on most lists of places to visit, depending on the type of traveler you are.  It’s been around forever and has been frequented by art and literary greats including, Oscar Wilde and Hemingway who allegedly came here to write.  It means ‘The Two Figurines’ which is taken from a play that was very famous in the 1800’s titled ‘Les Deux Magots de La Chine’, where ‘magots’ is equivocally meant to imply ‘Chinese tradesmen’, whose statues are placed inside the café.

Nowadays, this café in the St-Germain-des-Prés District of Paris is filled with everyone – people who enjoy a casual atmosphere, a catch up over a drink, some French fancies, people watchers and literary folk too, who in a hundred years may be talked about just like we do of Mr. Wilde now.  You see them all.  I’ve gone there on both my trips to Paris, once in a group with close friends from Cambridge, and then a second time when I went to enjoy the coffee, rest our feet from the days walking, and to French-people watch with my traveling partner, Oquai.

The chairs can be placed so that you can be mostly facing the street if you’d like to facilitate optimum viewing pleasure of people walking by.  Ours was just like that, a row in front, and people behind.

On trip two, we got our spot in row one, right where we wouldn’t miss a single person walking by.  We watched the french mademoiselles and monsieurs in their laidback, but fashion forward looks – – a scarf just quickly thrown in a casual, but looking-utterly-stylish on a monsieur, while the mademoiselle sauntered in her green stiletto heels, complimenting the stark red lipstick with a certain ‘this is me’ kind of style.  The French do this fashion thing quite well, non?

Madame Hélène was no exception.  She sat right behind us.  Madame was perhaps more like a well kept 73 yrs, but claimed she was hmm…round about 52 yrs.  This wasn’t possible if the ‘50’s’ referred to in the opening statement was anything to go by, or then, Madame was just pathetic at math and just blurted out things.  Eitherways, we nodded and accepted.

She was very petite, skinny, and impeccably dressed woman, in her green dress, pink tights, lovely heeled pink Mary Jane’s to match, puffing on her cigarette, listening to Run- D.M.C. (I kid you not, it was loud!), and there she was, sipping what she claimed was sparkling water.  (She later added that there may be some hints of vodka in the water.)

Her table was placed in a way that it was easier for her to chat up Sandy, the American blonde woman sitting in our row and to our left.  Their conversation was hilarious.  We heard it all.  Well, we didn’t mean to.  It happens in a tight space, doesn’t it?

We learned that Sandy, from the U.S., worked with a leading consulting company, but based in S.Africa, and was on her way to Ireland on work, with a brief pit stop for a rendezvous with Paris en route.  She sounded like a very smart, well-travelled, jolly, happy soul.

Quite swiftly, and I don’t know how, Madame turned to us, patted my shoulder and with a broad smile on her face asked,

“Where are you from?”

This is a complicated question to answer in general, as I am Indian, but I have lived outside of home for the past 11+ years, previously in the U.S. and now in London.  So, while I have arrived from London to Paris, yes, we are ‘from India’.

“Ahhh, you from Eendia? I liked very much Indira Gaandi. Hmm…very stylish”, she said, with her hands moving quickly to gesture Ms. Indira Gaandi’s hairdo.

“…and very shrewd no? And she dressed in…er..a saree no?”

“But I cannot go.  Too hot Eendia, and I cannot deal with hot. So I cannot go to Africa also. Too hot.”, she added.

I wasn’t sure if these were the type of statements that started and ended a conversation — you know, the ones when someone knows that one thing about a country or a race beyond their own, and blurts it out in the hope that there is spark of connection.  e.g. Person: “Oh, I know an Indian named Rajesh Patel?  Do you know him?”  Me: “No, I don’t know Rajesh Patel, surprising tho it seems even though he is Indian and I am Indian.”

This time however, I was wrong.  Here was a charming, friendly but seemingly slightly eccentric woman, who went far beyond the Indira Gaandi, and into politics, leaders and history.  Our Madame Hélène was a worldly knowledgeable person who was fun to chat with!

Before we knew it we were in a four way conversation – Sandy, Oquai, Madame and myself  — we learned about the highly priced ($1000), but very worth it tours in S.Africa to see the silver back gorillas, and how Botswana really is a place you must go camping.  Sandy felt comfortable enough to ask me about being an unmarried Indian woman of marriageable age, and how marriage played a role in my life.

We talked about the history of France; Madame shared her feelings towards the British, and even New Yorkers.  She loves the Yankees, and likes the British. We then ventured on to where we worked at the time, and like a proud Aunty, Madame Hélène insisted on telling Sandy, “this girl works with Walt Disney!’   Nevermind that Sandy was part of the very same conversation.  Sweet.

Madame told us about her life as a ‘slightly older’ single Parisien woman, her ideas of the political change that was imminent, and from time to time we were just plain gobsmacked with the inappropriateness of the comments that flew out from Hélènes mouth.  We wouldn’t dare utter those words, or even think those thoughts in this politically and socially correct world anymore.

Without a care in this world she voiced her unfiltered thoughts.  This older woman was rigid, yes, but she was honest and that’s what made her endearing, even if I didn’t agree with everything that she said.  She was of a different time, and from her perspective, she had her reasons, and I respected that.

It was the day of the French election, and Madame knew it was decision time. She excused herself to us saying she needed to check something.  She quickly switched her walkman from Run- D.M.C. mode I’d imagine, to radio mode announcing to us,

‘Hollande! Hollande!  He has won!’

And then this feisty woman pulled her earphones out of her ears, took a last sip of her ‘water’ and dashed off to the rest room for a quick one.

“I don’t take long.” she added as she turned to go, presumably thinking we were dying to know.

We had now spent a good hour and a half at the café.  The streets were filling up.  My camera was ready, and I stepped up to the curb to get some shots of the activity that was beginning to brew. “C’est fini Sarkozy!  C’est fini Sarkozy!”, they screamed as flags were waved, and banners were hoisted.   Champagne was opened, and everyone seemed very happy.  I wanted to take in some more of what was a special day on the streets of Paris, and so we decided to head off. 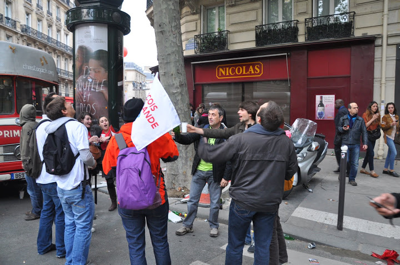 We bid goodbye, and wished Sandy well.  Before we could get to Madame Hélène, she got up, said a very warm and special Goodbye, wished us all the luck and love, and just like that, within seconds, she waved to her favorite waiters, left her tip, gathered her cigarettes and walkman and off she went tick tock very briskly in her pink Mary Janes.

I’m always fascinated about people coming together.  Wherever.  Whenever. And this is just one of the many situations I found myself in, and often guide myself into.   Isn’t it fabulous how four people from across the globe sat together, three in a row and one behind, and spent a solid chunk of time chatting like old buddies?

If there’s one thing I’ve always felt about travel, it is the opportunity to learn and explore beyond your own, to explore the sights, the history, the food of course, and most importantly the people.

Let conversations happen.  Smile, say hello.  Give in to the warmth and welcome of the people whose place you are in.  Listen, learn and swap stories.  People may be different from you, and that’s precisely why it’s like unlocking a treasure. You’ll walk away with much more than a trip.

I am going back to Paris in the summer for a while.  I will go back to the St-Germain-des-Prés and walk along the streets.  What are my chances I see a woman in a blue dress, with black tights and blue shoes, clutching on to her cigarette as she chatters away at Les Deux Magots?