Billboard International has partnered with the Museum of Contemporary Art in Krakow (MoCAK) to produce its inaugural exhibition, Whose History?, in Oswiecim, Poland.For one year the project will use an advertising billboard located between the city’s main market square and the Auschwitz-Birkenau Concentration Camp to present selected contemporary artists’ works.

Currently on view is the work of French artist Julien Berthier. Berthier’s work, titled Che Fare?, or as it is said in English “What is to be done?” draws its inspiration from the same sociopolitical / philosophical question presented by Vladimir Ilyich Lenin in his 1902 pamphlet, What Is To Be Done? Burning Questions of Our Movement. With his billboard, Berthier focuses on the difficulty an artist faces when attempting to create a public work in such a loaded and heavily historicized location such as Oswiecim. 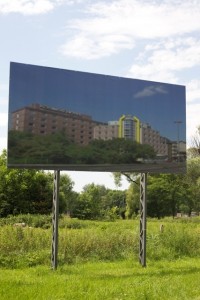 For more information and images of Julien Berthier’s billboard please visit the Billboard International websitewww.thebillboardgallery.com or the Museum of Contemporary Art in Krakow athttps://mocak.pl/en/projekty/show/23

Billboard International is an ongoing venture aimed at curating exhibitions and presenting artists’ works in wide range of contexts, mediums, venues and locations worldwide. Billboard International focuses on site-oriented projects – encouraging participating artists to develop concepts which focus on a specific locations’ role in social interaction on both a micro and macro level. Founder / Director, Joshua Schwartz is a multidisciplinary artist living and working in New York City. Billboard International’s Oswiecim location is representative of Joshua’s ongoing collaboration with the city and its various artistic and cultural outlets.