As its title augurs, this book by Edouard Levé (his first to be published in English) is an honest meditation on the subject of suicide. The reader is prepared for its honesty by the blurb, which explains that the author took his own life just ten days after delivering the final manuscript of Suicide to his publisher. As it extrapolates, this book is not simply another novel: “it is, in a sense, the author’s own oblique, public suicide note”. And as Jan Steyn writes in the afterword, the timing of Levé’s suicide guarantees that nearly every reader of Suicide will know of it. This close relationship between Levé’s Suicide and what is, in a more literal sense than Barthes imagined, the death of the author makes it difficult to review Levé’s Suicide without the uneasy sense that one is also thereby reviewing his suicide. The protagonist’s final act is described by the narrator, like a work of art, as ‘scandalously beautiful’. “Your death,” as the narrator apostrophises, “has written your life.” None of this changes the fact that Suicide is a novel. But it is a novel whose context, as with Sarah Kane’s play 4.48 Psychosis, affects how it is experienced, lending it an air of honesty, a certain seriousness and a poignant urgency for which the blurb to some extent prepares us. But no amount of blurb can prepare the reader for the first paragraph which coolly, swiftly and brutally sets out the facts of the protagonist’s suicide, as if to get it over and done with. The reader, like the protagonist’s wife, is almost made an unwilling witness to this final act.

The book, which is written in the second person, from the point of view of a close friend, does not attempt to explain the act with which it opens; as the narrator says, “Explain your suicide? No one risked it.” Rather, it is an intimate portrait of man at odds with this world, who never felt or seemed quite at home here. The narrative appears disordered and this is not just because the protagonist’s suicide inverts his biography, becoming the “foundational act” of his life. It’s also, the narrator tells us, because “[t]o portray your life in order would be absurd: I remember you at random. My brain resurrects you through stochastic details, like picking marbles out of a bag.” It’s as though we’re being shown scenes from the protagonist’s life as they occur to his friend insofar as they reveal something about his character. But these remembered scenes don’t answer the question which will inevitably have been in the reader’s mind since the first page: “What led him to take his own life?” They often lead, instead, to further questions which sometimes multiply into overwhelming lists. Like a work of philosophy, the novel raises more questions than it answers. But, like all good philosophy, the questions raised are not abstract ones, separated off from real life. They’re ones that any thoughtful person is compelled to address during the course of his or her existence. Albert Camus famously stated that suicide is the only “truly serious” philosophical problem. What he meant by this, I think, is that suicide is not the kind of problem that can be dissolved by abstract analysis or argument. It’s one on which each and every one of us is compelled to take a justifiable and practical stance.

It’s on suicide, treated as just this ‘truly serious’, existential kind of problem, that Levé’s book powerfully meditates by providing us with sketches from the life of a man who took that path, a man who, throughout his life “used to take the elevator to go down, but not to go up.” We’re presented with an individualist, an extremely independent man who nonetheless feels, all too keenly, the social pressure to conform. This is made clear by a passage describing his eccentric clothing habits. We’re told that he wore only plain and simple clothing that would never go out of fashion and he therefore only needed to buy new clothes when the old ones were worn out. His choices were driven by a ‘mania’ for collecting outfits that were nearly identical “in order to constitute the perfect assortment, the universal uniform freeing [him] of the duty of choosing how to dress [himself].” These choices come across as the result of a certain kind of individualism: whenever we choose how to dress ourselves, we’re unavoidably choosing to convey a certain message to the world. Our putting on this or that outfit is a move in a social game, whether we like it or not. The protagonist’s choices aren’t attempts to make especially bold moves in the game but, impossibly, to withdraw from the game altogether. It’s as though he’s too keenly aware of the social pressure to conform to dress ostentatiously, in bright, garish colours, for example. Although his choices are eccentric, his personal dress code is described as an attempt to realise a non-existent ‘uniform’, implying that it’s motivated by an attempt to conform and to blend into the background: an attempt at a kind of social self-annhiliation. I imagine the protagonist dressed entirely in black from head to foot. Indeed, his purchase of a second-hand pair of black leather shoes, whose previous owner turns out to have been a suicide victim, comes to foreshadow self-annihilation of a more radical kind.

In another vignette, the protagonist makes a visit, at two o’clock in the morning, to a graveyard which appears to him as a peaceful place in which he can feel at home. The only living person there, he walks about as if at a “silent ball organized by benevolent friends”. He feels an intimate bond with the place and has an experience described as that of being already dead or somehow between life and death. Having spent some time there, he’s driven to leave as if by a ‘survival instinct’. Having scrambled over the wall to get in, he scales it once again. But, as the narrator concludes the story, “While coming down the road-side of the wall, your foot pushed against the cemetery gate, which opened. It wasn’t locked. Access had been freely available: you had climbed over for nothing.” The experience in the graveyard becomes another metaphor for the protagonist’s state of mind: he feels more at home among the dead than among the living. The experience has the character of an epiphany; perhaps it would not be so much of a struggle to make the transition from this world to the next and to take his place among the dead, whom he sees as his ‘benevolent friends’.

These reflections on death, and on the human possibility of choosing to embrace it, are self-consciously engaged in as a response to the existential character of the questions raised by these subjects. And value of the book, in my view, lies in the similar reflections that it has the potential to prompt in the mind of its readers. As part of the entrance examination to a grand école, the protagonist is required to prepare a speech on the topic “Must one be afraid of having to live one’s death?” As he begins to think about the question in a disordered fashion, he realises its existential import, the fact that it is one that no one can really avoid addressing, one that’s far too important to treat objectively, from a distance. As he presents his thoughts to the examiners in the disordered fashion in which they came into his mind, and as the examiners question him about his speech, he feels as if death is questioning him in person. “It wasn’t embodied in the examiners;” the narrator says, “it prowled about the room between them and you.” For the protagonist, the fact that he has directly confronted the reality of death and the incomprehension that inevitably accompanies it, is more important than the abstract academic exercise or the the results of his examination. When he hears that his speech about death received one of the highest grades, the protagonist, who never used the elevator to go up, refuses to enter the school. Levé’s book reads like the unstructured kind of speech we can imagine the protagonist delivering to his examiners. It lacks some of the formal characteristics we might expect from such a work, but its value lies elsewhere. Its value lies in its treatment of death and suicide as “truly serious” philosophical questions in the sense that Camus had in mind. Like the protagonist’s speech, Suicide prompts each of us to confront the reality of death, to consider whether we must be afraid of living our own deaths and to respond to the instinctive incomprehension involved in questions of such profound importance.

Despite this seriousness, the book is not without its (often dark) humour ranging from farcical episodes, illustrative of the absurdity which pervades human life and interaction, to the practical joke the protagonist plays by designing his tombstone and having it inscribed (including the dates) while he is still alive. The human situation may be absurd, but Levé (and / or his protagonist) do not lack the ability to laugh about that absurdity. (Levé is best known for his photographic work depicting incongruous scenes like men playing rugby in business suits and people in stereotypically pornographic poses while fully clothed.) Inspired by members of Oulipo, notably Georges Perec, Levé enjoys playful and ironising ways of writing. But he brings this kind of writing to a truly serious subject. The result, in this reader’s opinion, is a profound meditation on death and the human potential to choose to embrace it. Although the story of Suicide and its author, is a deeply tragic one, Levé’s playfulness and his eye for the comically absurd make it also, at times, an unexpectedly life-affirming book. 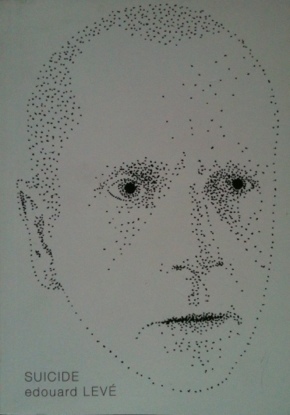