According to the New York Times, Depression and Brilliance go hand in hand.  Test your creativity by captioning a still from “Rocks In My Pockets,” a funny film about depression, currently in production. There will be prizes!

Rules:  Each Thursday from June 28th through August 30th we will post a still from “Rocks in My Pockets.”  Send your funny or depressing caption to captionrocks@gmail.com by the following Tuesday.  The winning entry will be posted each Wednesday night.  The winner will have the choice of receiving an original drawing from the film signed by Signe, or a signed DVD of “Ten Animated Films by Signe Baumane.”

Submit your caption for today’s picture by Tuesday June 3rd. The winner will be announced on July 4th, the Independence Day! The award will be mailed on July 7th.

Here’s the picture for your caption imagination: 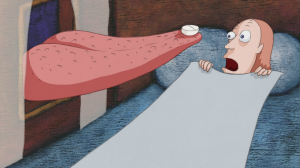