Language evolves. Twenty five hours used to be a measure of time, but now it is the name of a chain of design hotels in Europe. The Flaneur was invited to the Zurich branch to live it up during the 2013 Zuri Fascht. Located in West Zurich the 25 Hours hotel has only been open since late last year, a new edition to the family that also has hotels in Frankfurt, Hamburg and Vienna. 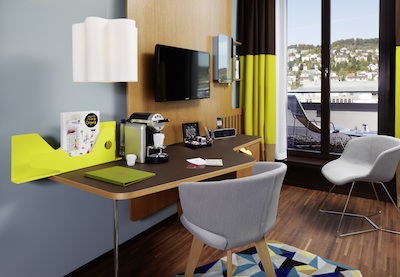 Located in the trendy Zurich West quarter where old industrial buildings are now art galleries and theatres, the 25 Hours hotel was developed by Alfredo Haberli. He controlled all aspects of the hotel design, right down to the easily-accidentally-decapitated objets d’art displayed on the bedside tables. The colourful carpets are by Tai Ping, the chairs by Vitra Chairs and the beds by Alias. There are ipod connected sound systems and TVs as well as unique wall decorations and free wifi. One unusual design feature is that my room had a window between the bathroom and the bedroom. Maybe that’s normal in uberhip hotels but I haven’t come across it before. 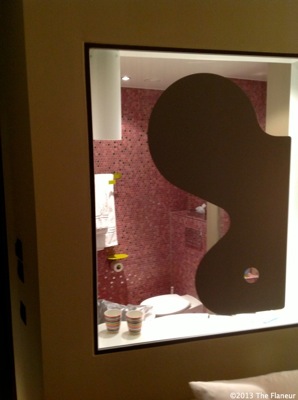 Breakfast was a tempting buffet of goodies, from pastries and French toast to sausages and smoked salmon, with many other options as well. It is possible to eat outside in the sunshine, which for a sun-starved Brit is a top delight. Before staying at the 25hours Zurich I’d not often started the day with a banana smoothie, but now I think it is a great idea and can recommend it. 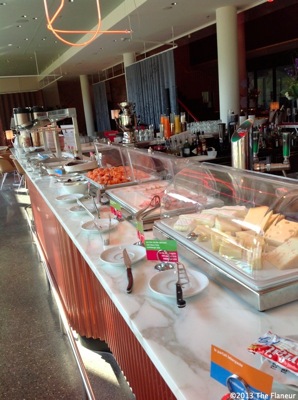 The lounge areas have trendy furniture, magazines and works of art and you can buy many of the design items that are around the hotel from the reception.  If you are feeling sporty you can play table tennis in the foyer and there is a sauna on the top floor. Tony Areal is the nearest tram stop.