Quick, there are only 154 sonnet days until Christmas…

Shakespeare may get all the kudos and Royal Companies, but – whisper it if you are in Stratford – some of his plays were written with a co-author. George Wilkins is thought to have collaborated on Pericles, whilst Thomas Middleton gave a polish to the much-admired Macbeth. Maybe in centuries to come the name of Sebastian Michael will fall off the title page and Shakespeare will gain all the credit for The Sonneteer. It wasn’t in the first folio, sceptical scholars will say, and it mentions tabloid newspapers, but that will just be taken as a sign of Shakespeare’s prescience. 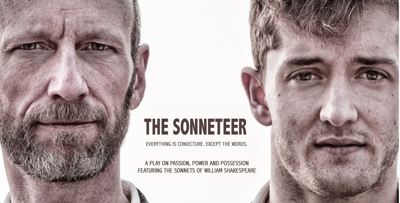 You might think there was enough Shakespeare on the stage, what with the 16 comedies, 10 histories and 12 tragedies that have come down to us. Sebastian Michael disagrees and he has used the sonnets as the basis for another play. This time last year Michael started reading a new sonnet every day. They had been posted online by a friend, who had realised there were 154 sonnets and 154 days until Christmas. An unusual combination of thoughts – who is even remotely thinking of Christmas in July? Maybe the friend sells Christmas puddings. Anyway, Michael’s fascination with the poems grew and in The Sonneteer he uses them to explore the still-contemporary issues that they embody.

He has given The Sonneteer the subtitle Everything is conjecture, except the words to highlight the fact that the play, though a feasible account of the sonnets’ genesis, is only one of several possibilities. After all much to do with Shakespeare is uncertain, right down to the basic question Was Shakespeare actually Shakespeare? and the sonnets continue this uncertainty. No one is sure why they were written or to whom they were written.

Focusing on the first 126 sonnets (the ‘Fair Youth’ sonnets), the play assumes that the Earl of Southampton was the recipient. Michael believes that the first 17 sonnets were commissioned, the young man’s family trying to persuade him to get married. Michael’s reading then takes the content of the sonnets literally, showing Shakespeare falling for Southampton himself. Was Shakespeare gay? There are scholars in the Yes!, No! and A bit! camp, so this reading isn’t as controversial as it might sound. Under its Shakespearian cover the play investigates the difficulties of a contemporary homosexual relationship between an older and younger man. The reasons for Shakespeare’s writing of the sonnets may be the given reason for the play, but it is as much a play about the gay relationships at its centre.

We jump constantly between two time periods – contemporary England, and the time of Shakespeare. This could be confusing, but generally works well. A simple flash of lights and sudden quick movements by the cast make most of the time-machine moments clear. A similar story plays out in both periods, showing the universality of the sonnets’ content. In the modern day sequences a middle aged professor falls for one of his students, scion of a famous family, in the same way that Shakespeare falls for the Earl.

Michael takes the roles of the college prof and England’s greatest poet. The parts are similar and in both he portrays a serious, slightly arrogant character, assuming mental superiority over his companion. The professor and the poet are both struggling with an infatuation for a younger man and we see the difficulties and dilemmas of the situation. Tom Medcalf plays the beloved earl, upright and full of youthful vigour. He also plays the student, less certain, but bold enough to argue with his professor.

The two actors are both on stage for most of the production. Two parallel coffin-shaped black boxes point towards the audience, a narrow gap between them making an awkward walkway. A white screen hangs at the back and receives occasional projections that don’t add greatly to the scenes. Otherwise it is all about the words. These are the words of Shakespeare, but also remarkably fitting extra dialogue by Michael that links between the sonnets as they are recited, barked, shared and soliloquised.

The contemporary segments are less engrossing and it’s not clear that the modern day parallel storyline is necessary. It reflects the fact that this complicated love story could be occurring now – though if so it would be conducted as text messages and emails, never to be made public without a little phone hacking. The production does not lighten its serious sonnetry, there is little change in mood or light relief. Maybe if Shakespeare had been more involved he would have stuck in some gravediggers or a drunk porter. But the fringe is the place for passionate and individual theatre. The Sonneteer has sincerity, though if you haven’t bought into the Shakespeare was gay premise, or the the Earl of Southampton was the recipient theory you will be thinking is this a true depiction of the creation of the sonnets? As the play itself admits, everything is conjecture. Shakespeare’s co-authors have been virtually forgotten, but W.S. himself still brings in the crowds so The Sonneteer should be well-received on the Royal Mile.