If I had been asked what an Avro RJ100 was last week I would have had to have guessed. A type of car? A washing machine? A Doctor Who baddie? Now though I know it is a plane with four powerful engines, suitable for airports with short runways like London City. Nicknamed the Jumbolino because of its internal size each row has two seats on the left and three on the right – though in business class the central seat of the groups of three are not used. 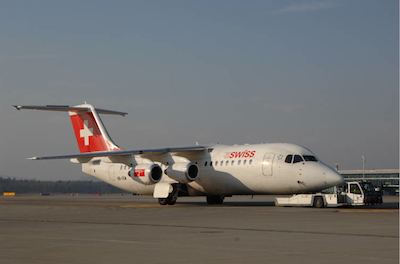 We flew around lunchtime and were served a light meal of courgette, smoked salmon and a cheese mousse (I had typed that as mouse, but fear not, it was a typo) in a tomato vinaigrette. There were also two cheeses – Cheddar and Brie – on a black slate plate. Hot bread rolls and a chocolate topped red berry compote completed the meal, along with a glass of Duval-Leroy champagne. You weren’t forced to have champagne, there were other choices, but when someone’s offering me a glass of champagne I find it hard to decline. The crockery was china, the glasses were glass, and it made an aesthetically elegant meal, until I added a bread roll and ruined the visual effect. Afterwards small bars of Swiss chocolate were handed out – as to whether chocolate aids digestion I am not qualified to comment, but I can say it was delicious. 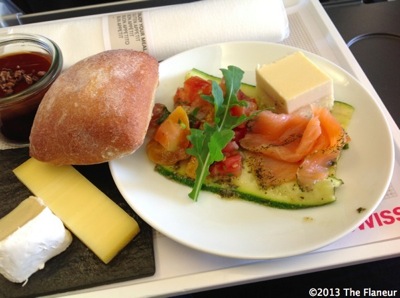 Business class luggage is given priority and arrives on the carousel first when you reach your destination. You are also able to take larger amounts of luggage, including two carry on items. At Zurich airport business class travellers have access to a designer lounge with walls of Jura limestone and dark wood accessories where there is more dainty food available, along with drinks, magazines, computers and plenty of room to work. There are also bedrooms where travellers can get some rest before their onward flight. 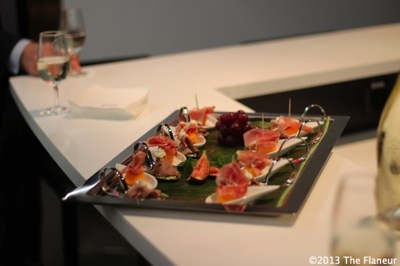 Travelling business class with Swiss also has the advantage of a separate check-in counter, priority boarding and deboarding and complimentary newspapers. Last check in is only twenty minutes before your flight and it’s not very far from security to the gate, so if you’re travelling from London to Zurich then the Swiss flight from London City is a very speedy option. Enjoy the champagne and chocolate!

The Flaneur flew as a guest of Swiss Air