Thanks to White Cube Gallery we have a signed Gilbert and George poster from their new exhibition to give away. For instructions on how to enter see below.

Gilbert and George have been fixtures in the London art world since they graduated from St Martins in 1969. Until 28th September their new exhibition Scapegoating Pictures is on at the White Cube Bermondsey. On opening day the artists spoke of their inspirations, work and life in London’s East End. It is the place, they claim, where everything that is going to happen in the world happens first. A microcosm of life where they can conduct research and spot new trends merely by heading out of their front door. 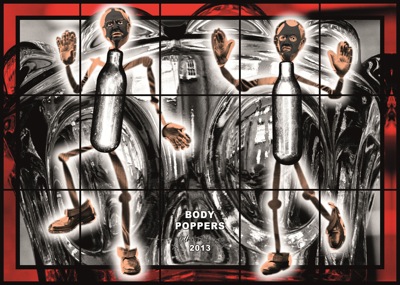 The new show includes over sixty new works, all in the photo-montage style that they pioneered. But what inspired the unusual title, Scapegoating Pictures?

George Scapegoating actually came from a leaflet or poster that we found on Brick Lane and took back to the studio.

Gilbert We took maybe 10,000 images before starting this group of pictures. We try to take images that speak to us.  We started to see these little bombs [discarded nitrous oxide phials] and we started to see all these people on bicycles, we started to watch television like Al Jazeera and we started to see more bombs going on and then in the East End of London we started seeing more and more women with burqas so all these subjects became very interesting to us. And then we designed many pictures and we tried to think of a title for this group of pictures. And for months and months and months we couldn’t think of a title. One night…

George …we remembered the picture with the poster that said Islamophobia is scapegoating and we realised scapegoating was the title.

The pictures look impressive as they stretch across the huge walls of the White Cube. The red and black colour scheme gives an overall uniformity, that is broken when you look closely at the content. Gilbert and George have never been elitist. Rather they want to involve all viewers in their work and create reactions. Elements of life in East London find their way into the flat works that hang like tapestries designed to cover as much of the wall as possible. Slogans cover some images, others shout their titles. Some are deliberately insulting (rape a Rabbi for one), though Gilbert claims We were terrorised by religious leaders for 2000 years and now we’re just poking fun a little. It is a long way from the art for art’s sake that they rebelled against as they grew up.

George We remember that as baby artists we had to join the national art system. But in all of those galleries colour was taboo, dealing with sex or love or hate or death were taboo. All the things that we wanted to deal with, death

George all those things were not suppose to be discussed in your artworks in that art world. It was the world of minimalism, conceptualism, everything had to be grey or brown or black. Materials were important, form was important. There was no content.

Content there is aplenty in the Scapegoating Pictures, which reflect the urban existence as filtered through the duo’s eyes. They feature themselves, staring straight out at the viewer, sharing the stage with the motifs they have picked up on. Images of bicycles, burqas and nitrous oxide capsules recur, these hippy crack containers appearing like the bombs that destroy much of the world and have led the artists to ponder the different quality of life that is manifested around the world.

George We never had people that you say good morning to that didn’t reply. That’s a new thing in life. We have to be attentive.

George It’s quite extraordinary when you think the privilege that we all live in today – with this beautiful gallery in this marvellous part of London. It’s just Europe, little Scandinavia, North America, Australasia and a few little outposts like Singapore and Japan. If not the rest of the world is completely wretched. One has to think about that every day.

Life is continually changing and Gilbert and George are out on the limit, reporting back on the changes that are coming. Much has already changed since 1969, but they accept change as progress.

Their contribution to culture continues at the White Cube until September 28th.

To enter the contest to win a Gilbert and George signed poster from the show, please either:

RT and follow @flaneurzine for a chance to #win a signed Gilbert and George poster #freebiefriday Details: https://flaneur.me.uk/07/gilbert-and-george-talk-about-their-new-scapegoating-pictures-show-win-a-poster

Sign up for our weekly newsletter on the front page of The Flaneur and then just send an email to comps@flaneur.me.uk with G&G in the title.

The competition ends at midnight on 8th August after which we will choose the winner. You must be over 15 to enter.