“We were in the jungle, there were too many of us, we had access to too much money, too much equipment, and little by little we went insane”

If you like Apocalypse Now then you’ve probably already seen this documentary about the making of that epic 1979 film. If so watch it again! Coppola’s wife Eleanor shot footage of the production which gives an insight into the madness of the shoot. There are also interviews with the stars as they look back on the experiences. Even if you are a bit meh about Apocalypse Now, if you’re interested in film making then it is recommended. It is the definitive Making Of film and even if your shoot is only scheduled for three days you’ll want to watch this to see what can go wrong. 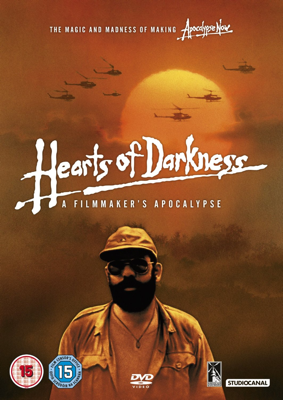 Hearts of Darkness presents the Apocalypse Now shoot as a crazy time. Thanks to his success with the two Godfather films Coppola had a lot of money and was able to indulge all his desires. He had an agreement with the Philippino government to use their helicopters, but they kept taking them away from the set to fight rebels. Marlon Brando turned up for his part of the shoot heavily overweight and insisting on talking for days about his character’s motivation, even though the shoot was already behind schedule and over budget. Drugs were freely available. The shoot was hit by a typhoon and the sets were destroyed.

Coppola had to finish the film as he had sunk his own money into it, so the shoot went on and on. Day 200 was celebrated with a complicated firework display – but by then money was no object. Brando’s weight meant that the final scenes of the film couldn’t be shot as intended. Coppola had to work on the fly, creating new scenes and shooting Brando differently. He concentrated on his face, pulling off some superbly lit shots. It is a good example of necessity forcing filmmakers to create something better than had been intended.

It is surprising not to see any of the footage of Harvey Keitel playing Willard. Keitel had been the first choice for the Captain, but he was replaced after a week of filming by Martin Sheen. Keitel didn’t convey the innocence that Copploa wanted the character to display, and Sheen had impressed when he auditioned for The Godfather.  But Martin Sheen  brought his own issues. Heavily smoking and drinking Sheen was himself to have a heart attack and have to go home for weeks, further delaying the production.

We learn that Orson Wells wanted to adapt Hearts of Darkness as his first film. The studio even shot some tests before pulling the plug. Welles abandoned the project and went on to create an original piece called Citizen Something.

Behind the scenes footage is usually interesting and that is certainly the case in Hearts of Darkness. Dennis Hopper argues with Coppola about the importance of actually learning his lines, Sheen is seen with bloodied hand after mistaking how far away he was when punching a mirror. Brando stops his delivery after an unfortunate occurrence with the words, ‘I swallowed a bug.’

Hearts of Darkness is one of the must-see films about filmmaking. It may even be a classic – after all it has gained its own spoof. Hearts of Hot Shots! Part Deux—A Filmmaker’s Apology.

Get Hearts of Darkness: A Filmmaker’s Apocalypse