If you think contemporary art galleries all have white walls and signs saying Do Not Touch, then you need to visit Jupiter Art Land. This is a private collection of site-specific sculptures twenty-five minutes west of Edinburgh. Owned by Nicky and Robert Wilson it has been open since 2009 and now has over twenty large-scale works of art by renowned artists such as Cornelia Parker and Anish Kapoor. It also has an indoor gallery space, a shop and a cafe. The best contemporary art gallery in Edinburgh might actually be a Jacobean estate. 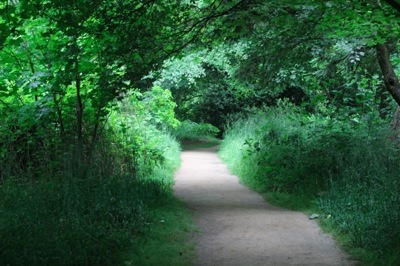 I was in town for the film festival and when you have spent the last seven days in a cinema it is quite a change to march into a verdant, green landscape. With a map and a raincoat I started to explore the sculpture park. The path is easy to follow, though you need to keep your eyes peeled to spot all the artworks. There is no set route to follow and you can back-track at any time. 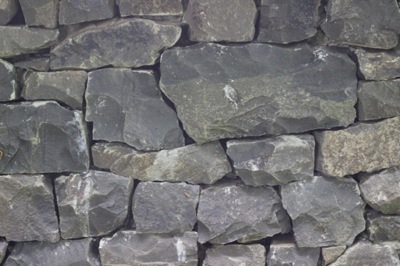 Land artist Andy Goldsworthy has several pieces at Jupiter Art Land. The first you will come across is his Stone House – Bonnington. This is a perfect hand-built building, with a tempestuous bedrock floor inside. The contrast between the elegant simplicity of the man-made structure and the wild floor that he has left entirely untouched gives a strange disconnect between what you see on the outside and what you experience when you step inside.

A guide was showing a group of school children around the outdoor gallery. When I was looking at Ian Hamilton Finlay’s Temple of Apollo she told me that his son Alec had recently created a bothy inspired by it. No one likes to admit they don’t know what a bothy is, so I thanked her and walked in the direction she indicated. Not knowing what to expect I walked through the grass, pondering what a bothy could be. 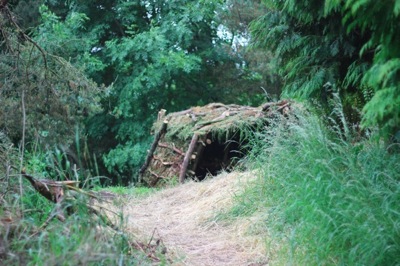 A bothy by Kevin Langan and Alec Hamilton Finlay

It turns out it is a kind of mountain refuge, a basic shelter for travellers. Finlay is involved with the Bothy Project to produce a new example on a remote Scottish island but he invited Kevin Langan to build this one from fallen wood and natural materials. Near a large house in the grounds of a great estate the structure loses the qualities of free shelter for all that bothies have in their usual mountain locations and becomes a comment on the housing system. 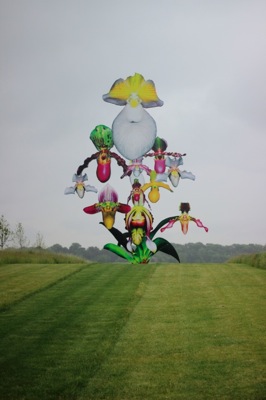 There are many works that you will come across as you make your way around Jupiter Art Land, from the huge terraced earth works by Charles Jenks to Love Bomb by Marc Quinn. This piece looks as though it has been photo-shopped into the picture, but take my word for it, it really is there out in the Scottish landscape speaking of genetically modified madness. 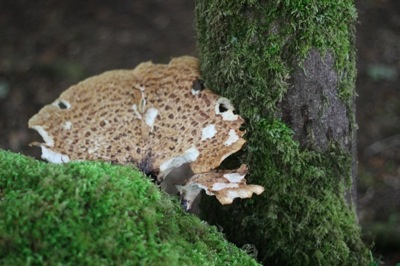 Walking around Jupiter Art Land is an exciting way to see art, coming across pieces unexpectedly, seeing them in different weather and types of lights, rather than just the austere perfection of the typical gallery. Jubilee Art Land is the only art gallery I have been in that also has bracket funghi growing in it. In a sculpture garden you have to be careful it’s not part of the work, but it didn’t have a label on the map so I think it was natural. 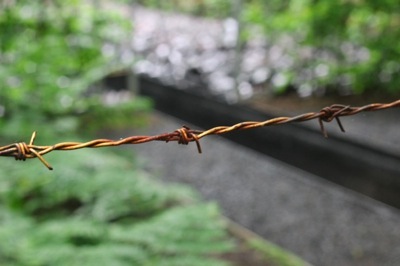 Everyone reads an artwork differently but I guess the effect Anya Gallaccio’s piece had on me wasn’t what she was intending. The Light pours out of Me incorporates rusty-looking barbed wire and you enter the piece by descending down a narrow set of steps. I’ve recently seen too many film fest documentaries featuring solitary confinement and disappearing into the earth felt like entering a Taliban prisoner hole or some cruel and unusual US punishment area. If you haven’t recently seen Dirty Wars maybe you will read Gallaccio’s work as a fairy grotto surrounded by golden wire, an amethyst lined garden folly, but I was glad to escape back up to ground level and shut the gate behind me.

Until September Jupiter Art Land is showing a large, powerful piece by Sam Durant. Scaffold will be on display until 15th September and is the sort of work I want to say nothing about so as not to affect your experience. Until 21st July there is also an indoor exhibition curated by Susanna Beaumont which brings together works by three artists – Aleana Egan, Lucia Nogueira and Boran Sarcevic. In contrast to the works outside these pieces are fragile and ethereal, exploring line in different ways.

The map suggests that a walk around the artworks will take about two hours. I cut my visit slightly short as the rain decided to really show what it could do. Although a spot of rain shouldn’t deter the art lover, I have to admit I was deterred. I should have brought a brolly. Jupiter Art Land could sell artist-designed limited edition umbrellas – I’ve got a good idea if anyone’s interested.