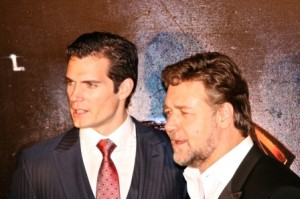 Rain didn’t put off hundreds of excited fans gathering at Event Cinemas George St on Monday night for the premiere of the brand new Superman flick, Man of Steel.

Mr Snyder said he had cherished the opportunity to “create and build something” in making the film.

“I love mythology and I think that in a weird way Superhero movies are our modern mythology. That really attracts me,” he said. “I feel like it’s sort of a way of figuring ourselves out.”

Henry Cavill, who bears a striking resemblance to Christopher Reeve, the actor who starred in the first 1978 version of the Superman film, said he had worn one of Reeve’s costumes during a screen test for the film.

Showing his humble approach to stardom, Mr Cavill said “It’s an amazing job. It’s an art form when it’s done properly, and you get to have a lot of fun playing dress up… I enjoy it.”

And of course in true Australian form, Russell Crowe had plenty to say about his beloved South Sydney Rabbitohs.

He said he was maintaining his commitment to providing everyone on set of all his movies with a team hat. He also told surprised onlookers that he had worn not one, but four layers of spandex in Man of Steel. He said his fitness regime for the film had been rigorous.

Man of Steel opened nationally in Australia on 27 June.