Octogenarian Gerry Crown is celebrating after winning the fifth Peking to Paris Rally with navigator Matt Bryson in a 1973 Leyland P76 – just as the vehicle is celebrating its 40th anniversary. Australians Gerry, aged 81, triumphed in the Classics division for the second Peking to Paris running with navigator Matt after a relentless battle with British duo of Peter Lovett and Tim Smith in the 1965 Porsche 911, who had to settle for second place. However Peter and Tim still had cause to celebrate after winning the new European Trophy for the classics. 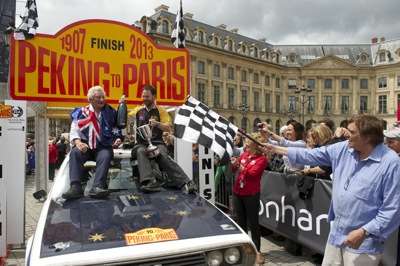 “I’ve competed in the Peking to Paris four times and this one was the most demanding and the most competitive”, said Gerry with a bottle of champagne in his hand as he crossed the Paris finish line. “The victory is all down to the car. Every night Matt got under the car, checking and fixing everything to make sure we kept going hard. It’s the best rally car I’ve ever driven!”

The ex-1974 World Cup Rally winning Citroen DS23, crewed by Robbie Sherrard and Peter Washington, came third in a car that Peter described as “continually punching above its weight.”

Out of the 96 cars that left the Great Wall of China on 28th May, 86 cars crossed the finish line in Place Vendome, Paris today, with thousands waiting, including friends and family wanting to see their loved ones after 33 days on the road.

The crews have travelled around 8,000 miles, driving almost half way around the globe, crossing two Continents and the biggest single land-mass between two capital cities that has seen a full east to west crossing of the World’s greatest wilderness. Its too early to ask them if they’d do it all again even though most would jump back in their cars at the chance.

The next Peking to Paris Motor Challenge takes place in 2016 and organisers the Endurance Rally Association are promising a route through Nepal and Tibet, retracing the wheel tracks of the Himalaya Rally.