In the 19th century gents were always stopping at inns for a pint of port wine and a chop. By the 20th century the delicious product of the Portugese Douro had been relegated to a treat at the end of the meal. Today matters are even worse. After all, it’s hard to call for a postprandial glass of port when you’ve just eaten supper on your knees watching Big Brother. It’s even harder to force your female relatives to retire from the sitting room whilst you enjoy it. 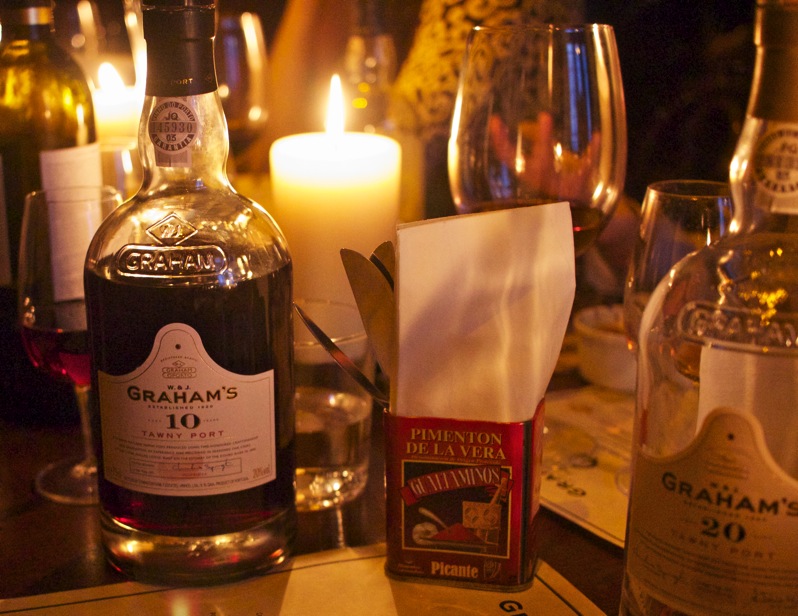 This decline in traditional port drinking is of course of most worry to the port producers. They want to sell more port, make sure that the divine nectar that they have laboured over for generations is still appreciated in the 21st century. Hence an attempt by Graham’s to unyoke port from Stilton and introduce it to a new generation of drinkers who don’t tend to sit talking politics at the end of their meals.

At The Port House on the Strand Graham’s introduced several different food and Port pairings, aiming to rebrand Port as a drink for all seasons and push it out of its comfort zone. There were two different approaches – focusing on the similarities and playing up the contrasts between the drink and the food.

The 10 Year Old Tawny was presented with the myriad flavours of deep fried courgette flowers stuffed with cream cheese drizzled with honey and almonds. The 20 Year Old Tawny was tasted with creme brûlée and caramel ice-cream. These pairings didn’t work; served with a food to match the sweetness the effect is too much. The twenty year old Tawny is an exquisite, complex drink on its own, but here the effect is a sugary onslaught that takes away from the rich, dry-fruit tastes of the wine. If you’ve spent £25 on a bottle drink it on its own.

Later we tried a Spanish Picon cheese (a close relative of Stilton) with the Quinta dos Malvedos single vintage from 2001. This classic salty cheese and fruity Port combination is still the best; you can see why it has been around as long as the Anglo-Portuguese military alliance. Indeed, you can see why the Brits thought it vital to have an Anglo-Portuguese military alliance.

The Six Grapes Reserve is a particularly nice surprise, full of young fruit. It was served with dark 70% chocolate, a delicious match but another classic which suggests that the best pairings have long been discovered.

As a new way to drink port, a white Port sangria was the greatest success. Sweet and chilled but not cloying it has a legitimate claim to be taken seriously as a summer drink. Here we enjoyed it with roasted nuts and hams, with which strong flavours it coped well. I also heard unsubstantiated rumours of a Port and Tonic, which could provide the successful reincarnation the Port shippers are looking for.

The basic issue with drinking Port with a meal is that in all the undiluted guises we tasted it is just too sweet. Mr Pickwick may have been able to drink a pint at a time, but modern palates can’t take the unremitting lusciousness. Nor can modern physiologies – 20% is a high alcohol percentage to drink throughout a meal. It might work if you settled down to a small lunch of purely dark chocolate and Stilton, but that’s a diet that would soon bring issues of its own.

After many sips, delicious tapas from the Port House Kitchen and much Port education I discovered… that Port is still best enjoyed on its own, with maybe a little cheese or chocolate. I wasn’t convinced by any of the pairings except the well-known classics. However the tasting drew attention to the different characteristics of Ports, from the nutty aromas of the Tawnys to the fruity, blackberry tastes of the bottle-aged Quinta. Try a white Port sangria, but stick to the old-school food pairings for the classic Port styles.

1 Comment on Port tasting: can anything beat the classic food pairings?