No music. No speaking. Just the sound of shuffling feet, laughter and the occasional flapping tentacle. Swiss mime-masque theatre troupe Mummenschanz have brought their The Musicians of Silence tour to London. A limited run until 27th July sees the Sadler’s Wells Peacock Theatre host the four-person team and their show which delights the audience no matter their age. There is no official soundtrack, instead the high-pitched giggles of youth and snorts of laughter of age accompany the weird, timeless creatures that are created on stage. No matter how often you head to the theatre you won’t have seen anything like Mummenschanz before – unless you have seen Mummenschanz before. 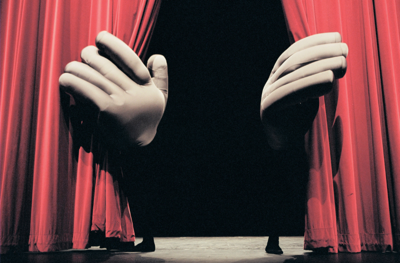 Performed with giddying flexibility by Floriana Frassetto, Philipp Egli, Raffaella Mattioli and Pietro Montandoni the identities of the artists are entirely hidden. They wear black cat-suits which allow them to manipulate coloured objects without being seen. They also are inside some of the costumes, using several different methods to bring to life their peculiar silent inventions – characters such as a giant slinky, a 3D Pac-Man, a person with toilet-rolls for facial features, giant inflatables and many more.

The group has existed since 1972 and this show is the equivalent of a rock band’s Greatest Hits album.  Short sketches featuring successful moments from the company’s past fill the 80 minutes. Right from the first bulging of the curtain and the appearance of a giant hand, the show has a quality that encourages laughter. People want to laugh, are ready to laugh and do laugh. Something funny doesn’t have to actually happen, Mummenschanz have found a means of performance that the audience finds inherently funny.

Each scene follows the same format. You are watching people manipulating unusual costumes, which they are either inside or behind. This starts off inventive, unusual and appealing, though it does become repetitive. There is no continuity between the different segments and the struggle to find an ending is obvious in some of the sketches.

Most impressive are the abstract shapes that the cast create and animate. At the beginning the audience roared at the simple sight of an unidentifiable object – imagine something living trapped inside a large bag made of curtains – trying to manoeuvre itself onto a box. This and a later sketch brought to mind the punishment for patricide in Ancient Rome. It wasn’t pleasant – you’d be sewn inside a bag along with an ape, a cockerel and a dog. Some of the thrashing around on stage must have been similar, but here it produced laugher rather than horror.

One scene stars two characters with faces made of Blutac. A comment on the dangers of cosmetic surgery – one looks awful, yet is pleased with himself. Another tries desperately to mould his face into something else, failing dismally. The live cartooning also works superbly, large coloured pipe cleaner type sticks being bent into shape, becoming heads, people or limbs. It would have been interesting to see this section expanded, but even so it demonstrated what can be achieved without words or sound effects.

I didn’t find the evening as funny as most of the audience, but it is an achievement to create a show that appeals equally to children and their parents. It has a simplicity that belies the skill in putting it together and making it work – Mummenschanz is unique and will give you an evening of images you won’t quickly forget.