When you enter a cathedral you expect peace, quiet, a place for reflection and contemplation. High on the list of things you don’t expect are diggers, dumper trucks and hi-vis jackets. I entered Sheffield Cathedral and was met by the most unexpected of sights… 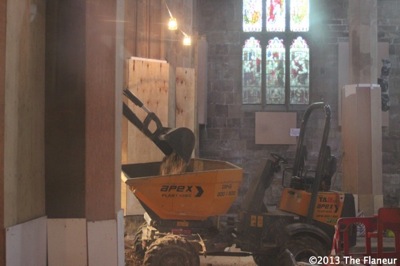 The whole of the nave was a building site. Workmen in hi-vis jackets made the cathedral look like roadworks on a very ecclesiastical part of the M25.

‘We’re replacing the underfloor heating,’ I was told, which left me with more questions than I’ve ever had about a cathedral floor before. Normally I pay little attention to the floor. Disgraceful as it may sound as long as it is there I take it for granted. The floor really is one of those things that you only notice when it is missing.

‘It already had underfloor heating?’ I asked in disbelief, used to churches where even over-floor heating is rare.

‘But,’ I peered at the floor that was being dug up by a digger, leaving the columns looking strangely bereft. ‘How old was the floor you’re digging up?’ 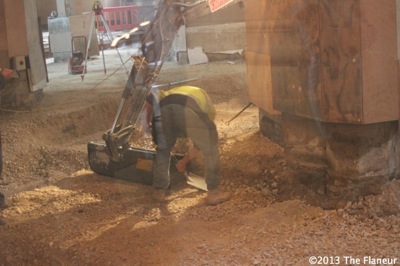 Which I suppose is OK. I had visions of the destruction of a delightful historic floor – perhaps hand-painted by William the Conqueror, or maybe composed of tiles baked in the sun by Thomas Becket. But a lot of Sheffield cathedral is pretty modern. Well I say modern, parts of the building do date from the 15th century, when it was a parish church, an offshoot of Worksop Priory. But it was only in 1914 that it was made head of a diocese and had a cathedra installed. New north and south transepts were added in 1880. That’s virtually yesterday as far as cathedrals go.

As you can probably guess, the presence of all the heavy equipment meant that I was unable to have a proper look round and report back for the latest episode of our series What I saw in the Cathedral. I picked up a leaflet that extolled the many things that I wasn’t able to see. The Lantern, the font, a bell from HMS Sheffield. The Lantern sounds well worth a look, being described as ‘an abstract interpretation of Resurrection and the Holy Spirit transforming human conflict and struggle and leading to healing and growth’.  I’ll have to go back, but here are a few of their treasures that I was able to see. 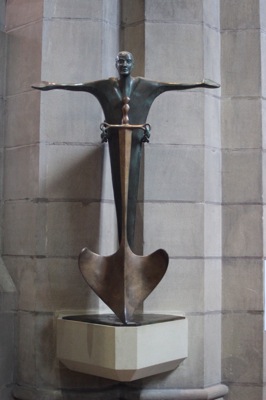 A memorial to commemorate those who served on the HMS Sheffield Royal Navy ships. 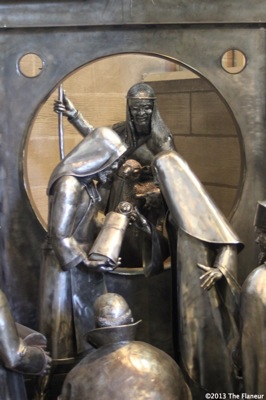 A nativity scene made from the steel that Sheffield is so famous for.

The window of The Six Sheffield Worthies has 15th century mullions and tracery, however the glass is from the 1900s. It features six men who were benefactors of the church.

And so it transpired that my visit was badly timed. Much of the cathedral was out-of-bounds, unless you were wearing a hard hat and metal-capped boots. However by June 2014 the cathedral should have new floors, new seating, new lighting, a new entrance and that vital part of all modern cathedrals, a retail area. The refit is costing upwards of £4million – if you want to know more or donate to the renovations please visit www.sheffieldcathedral.org