Slender is just about one of the scariest experiences I’ve ever had. It manages to get close to the kind of horror I’ve only really encountered in Jerzey Kosinski’s harrowing Steps, or David Lynch’s Inland Empire. As with both of these, however, the experience of horror comes more from the deeper human fear of abject loneliness and vulnerability as opposed to anything overtly frightening. Slender literalizes these deeper human fears as part of the games mechanics, providing what is simply an exercise in pure horror. Loneliness becomes ‘you are literally on your own’ (for the time being anyway) and the feeling of vulnerability is made immediately apparent from the finite power of your flashlight and the absence of a heads-up display (known in gaming as the ‘HUD’ – an interface which typically gives you important information like your character’s health and location).  Immersed in what appears  to be a dark and dense forest, your sole objective is to collect 8 pages about the mysterious ‘Slender Man’ (a mythological figure originating from the Something Awful forum thread) , who when encountered plays a kind of dreadful variation on the old nursery game of What’s The Time Mr. Wolf?

Not having a clue where these 8 pages are is central to the equal parts horror and fun of the experience. It is very easy to feel lost in this game, though more terrifying than this is your awareness that the strange location you are in is actually pretty small. The size of the map is measured by the incessant fencing which turns the location you are in into a compound created by an intelligent designer. Such a sandbox design means you always end up stumbling across the same tracks as you try and plot a mental geography for your survival.  Being lost becomes a kind of distant and fleeting pleasure as you frustrate  over returning to the same spaces.

The sense of the intelligent designer within the game is one which extends to the intelligent designer(s) outside of it. The sound of your footsteps and the faint ambience of an owl wooing presents a minimalist sound design faithful to the simplicity of the game’s visuals. Indeed, it is this minimalist texture which really provides the essential experience of horror you get when playing this game. The minimalist style is, if nothing else, the product of an exercise in strict control over detail. The awareness of something more and then the refusal to present more is part of the creative procedure of minimalism. Part of the horror of Slender’s simple design is an awareness that what is not there – what is deliberately absent – is as disturbing as what is. 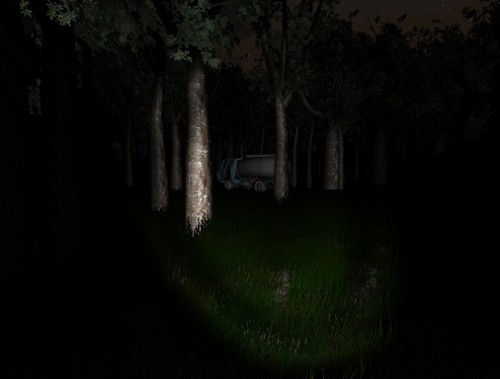 Such a style seems to induce a trance-like effect which reminded me of Derren Brown’s famous Zombie Arcade experiment. I found myself repeating internal mantras like ‘it’s only a game’ to help me escape, albeit temporarily, from Slender’s hypnotic pull. The reward of satisfaction and progression as you begin to discover and collect the 8 demented pages becomes increasingly welcomed in what is an otherwise increasingly bleak environment. Yet, as each new page  is collected the game begins to change in precise and controlled ways, delivering an increasingly sinister and intensifying tone. These gradual increments of tension and horror which accompany the small changes puts you in a  fiendish double-bind; namely, the necessity of finding each new page at the price of being one step closer to something horrific.

If you do not play videogames regularly or have little interest in the horror genre, I urge you to stick the headphones on and give this free indie 55 megabyte sized game a try.

You can download it for free from here: https://www.mediafire.com/?vql3a6fbjq0qbbv