When I was at school not a lot of work got done on the last day of the summer term. After months of adding x to y and weeks of hic-haec-hoc-ing all but the harshest teachers would give us a few moments off from learning the Aeneid by heart or working out what z equalled for the umpteenth time. Last Tuesday was the last day that the Lords were sitting before the summer recess and I wondered if they had a similar attitude to the last day of term. Were they excited about the summer break? Would the noble Lords be concentrating on bills and debates or would they be playing tiddlywinks on the burgundy seats, leapfrog in the lobby and consequences in the committee rooms?

London had been having a heat wave which looked like it might last forever. Unfortunately it came to an end as I walked to Parliament. Luckily I have standard issue BWI (British weather intuition) which looks up at a clear blue sky and thinks better take a jumper, so I had taken a cap, just in case it started to rain. It did start to rain, so pleased with my prescience I attached my headgear to the correct part of my body and continued across Parliament Square. It really was the most comfortable of caps. You really felt as if you weren’t wearing it.

The Palace of Westminster

I presented myself at the visitors’ entrance at Cromwell Green, halfway along the Palace of Westminster. A policeman approached.

‘Before you go in, I’ll just ask you a few questions. Have you got a screw driver? A knife?’

I considered. I don’t always know exactly what is in my bag. It accumulates things. But a knife was unlikely. And I am not a regular user of a screwdriver.

The policeman looked at me gravely then nodded.

I walked in the rain along a metal gangway by the side of the Palace. Maybe Parliament had instigated a new security system based on trust. A policeman asks you if you have any weapons, and if you say no he looks at you gravely and decides whether you are telling the truth.

I reached an entrance. Another policeman stood outside.

‘Put this round your neck,’ he ordered, handing me a lanyard with no pass attached. I obeyed and he directed me through the door.

It became clear that Parliament had not instigated a security system based on trust. Here were X-ray machines and metal detectors and a queue of people waiting to be searched.

I stepped forward and a policewoman attached a visitor permit to the lanyard round my neck. ‘Visitor has been screened‘ it told the world. I emptied my pockets into a tray.

For once I got through a metal detector without setting off the beep and I didn’t have to take off my belt. Hurrah.

I followed the signs which led back outside into the rain. The first turning was the Jubilee Cafe. I bypassed it and came to Westminster Hall. 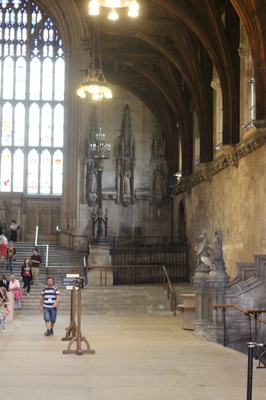 For those who haven’t studied the history of the Mother of all Parliaments, Westminster Hall dates from 1099, has a soaring hammer beam roof and is the only original part of the Palace of Westminster remaining.The rest of the iconic landmark is a Gothic extravagance that only dates from the 1840s. The older medieval structure was almost completely destroyed by fire in 1834. Only Westminster Hall survived, a place of history where Charles I was tried and Guy Fawkes was found guilty. Today it is under-utilised as a big entrance hall with a few benches, a collection of wheel-chairs and a small shop selling souvenirs.

Further into the Palace, and unfortunately past a no photography sign, I was invited to sit on a green leather seat at the side of an ornate passageway. The floor tiles were being replaced, all the statues were wrapped Christo-style in polythene and there was a white crime scene type tent at one side. I wondered what was in it and if I had missed a big event on the news, but Parliament waits for no man and I was almost immediately waved through to the central lobby. Here I was added to a queue of people sitting along a red leather seat at the edge of a passage that could have passed for a cathedral cloister. Every time one person was allowed through the door at the end the rest of us shuffled along the seat. To get into the House of Lords actually involves a sit-down queue. I didn’t realise that anything so genteel existed. All queues should be sit-down queues. The House of Lords may get some stick, but no one can say it doesn’t know how to organise a queue.

A policeman walked past in shirt-sleeves and a helmet. That seemed a bit odd. Wearing a hat inside the Houses of Parliament was surely a faux pas. In less forgiving times such behaviour probably carried the death penalty, or at least transportation to Australia. (Which by the way I’ve never really understood as a punishment. Who ever thought that leaving a wet, dark overcrowded island and heading to the sun was a bad thing? I bet there were people committing crimes just to get to Oz).

I digress. Back in the queue for the House of Lords the policeman slowed slightly as he went on his way somewhere and said, as though he was a 19th century town crier announcing a new government policy,

‘Hats off in Parliament!’

I nodded agreement with this sentiment, although I thought it odd that it issued from a man who was clearly wearing a hat. It was the clearest case of do as I say not as I do that the world has ever seen. Anyway, none of my fellow queuers appeared to be wearing a hat.

‘Hats off in Parliament!’ He repeated, making no attempt to remove his own.

It was about now that I realised that I was wearing a hat. My old cap to stop the rain had done its job and then remained atop my physique.  It was this that had attracted the peeler’s attention.

I removed it and no more was said about the matter, unless I get a letter in the next few days. He didn’t even return with heavies to arrest me before I was waved through the wooden doors by another policeman and had to sign a form saying I wouldn’t interrupt proceedings. Reader, I signed.

An old sign pointed the way to the strangers’ gallery, adding the information that All demonstrations by strangers in the gallery are out of order and must be treated accordingly. I’m not sure what that means in practice but as long as I managed not to shout anything I thought I’d be OK. Even now there was another policeman to get past, this time asking if I had a mobile phone.

I gathered that he wanted it. I fished it out of my pocket and handed it over.

He gave me a numbered disc and after climbing a few more steps I was at last in the chamber. It takes longer than you think to get there, so if you’re planning a visit make sure you set off early.

The House of Lords Chamber

The House of Lords chamber is ostentatious. I’d like to find a more positive word, but how else can you describe a room that features a huge golden double throne. I’ve heard that rooms need a feature, a focal point, but what were the architects Pugin and Barry thinking? What’s wrong with a big mirror or  a large clock? The walls are panelled for half their height before stained glass windows take over towards the ceiling. The glass doesn’t soar as majestically as at Paris’s Sainte-Chapelle, but I guess that was the effect for which they were aiming.

There were more people in the Strangers’ Gallery than in the chamber. I was disappointed to discover that the Lords hadn’t kept something fun to do on their last day. There was no Report on the Lords Test match being given by a cricket-mad peer. What was first up was The European Union (Approvals Bill) and it provoked a debate about as exciting as could be expected given its title. One woman found solace in her iPad as Baron Renton of Mount Harry told us that he had no objection at all to the first part of the bill. He did however have objections to the rest of the bill even though he believed that it is only through active membership of the EU that Britain will grow.

In the Strangers’ Gallery the realisation that the next debate was also about the EU was too much for some of my fellows. They left and were replaced by a new crop of bright-eyed strangers whose luck it was to hear Lord Boswell of Aynho summarising the Report of the European Union Committee on its work in 2012-13. Amongst other statistics his committee had scrutinised 270 EU documents. I thought that devotion to duty deserved a round of applause, but no one started one and as a stranger I would have been thrown out if I had started clapping. But 270 EU documents? Lord Boswell ought to be knighted.

In reply Baroness Corston spoke of her sub-committee which had been handed over to her by the previous chairman. It ran as easily as Inspector Morse’s well-oiled Jaguar. This contrasted with another committee she had heard of, which had been as difficult to run as a kit car with the instructions in Hungarian. It was the lightest moment in the morning, but it didn’t count as end of term joviality. They work right up to the bell in the House of Lords. And they don’t like hats.