Any person in their 20’s will likely hear “My Heart Will Go On” and scoff. Celine has become a bit of a subject of ridicule. Yet, they don’t make fun because it’s a bad song (schmaltzy and old fashioned it may be).

They make fun because they remember, locked in the dark depths of their psyche, that they loved that song. They wept like babies when Celine crooned over the biggest love story our generation had ever seen. They bought the CD and hit repeat for hours in the darkness of their bedrooms whilst daydreaming about Leonardo DiCaprio.

So off I toddled to see Titanic 3D, armed with only my memories of all-encompassing obsession and heartbreak and a more clearly defined sense of the absolute horror the film depicts along with it’s love story. Also, did I mention I’m afraid of water?

Needless to say, I was a wreck from the opening titles. Hunkered in my seat, sobbing openly behind my glasses, I dried up only long enough to see Billy Zane do some pouting or Leo flick his curtained hair out of his impossibly-tanned-for-living-in-Ireland face, before I was off again. It was just as heartbreaking, and poignant as I remembered, perhaps more so as you approach a film as an adult, with an adult understanding of the films story.

But this morning, I realised Titanic had given me more than a lifelong appreciation of men with floppy hair and the desire to spin round really fast every time I hear someone play the fiddle. Without further ado, here are:

The things I learnt from Titanic.

2. Billy Zane was not really the embodiment of evil I thought he was. The poor guy gives up the chance of survival a damn sight more times than I would to try and rescue Rose, before that whole trying-tokill-them and stealing-little-girls-to-get-on-lifeboats bit of the movie (poor Cal.) In fact, the guy even goes hunting on the Carpathia for her! (Or maybe his diamond….I’m not that receptive to subtext).

3. Young people nowadays have no appreciation the way we did when it first came out. Then, it was a phenomenon. Now, it seemed an excuse to giggle over Kate Winslet’s boobs and the steamy sex scene in the car. For Shame, Youngsters of Scotland.

4. I am NEVER going on a bloody cruise.

5. When confronted with too much cutlery, work outside-in. (Coincidently, Pretty Woman also taught me this.)

6. Don’t travel anywhere with Leonardo DiCaprio. Titanic? Boat Sinks. The Beach? Cliff diving, hungry sharks and travelling back to civilisation on a giant home-made raft. Catch Me If You Can? Unlicensed pilot! The Aviator? Drunk pilot! Shutter Island? Asylum breakout. Inception? His dead wife will try to kill you in your dreams. The man is an insurance policy nightmare.

7. That damn door Rose lies on is HUGE! Oh that caused many a sleepless night for my 10 year old self. Why could they not have done the sensible thing and hopped on from opposite sides of the door? I want my happy ending, dammit! 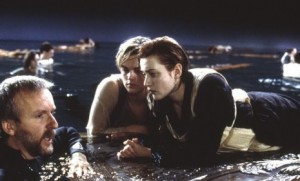 See? Everyone’s on this god-damn door!

Perhaps this is where my fear of boats came from? 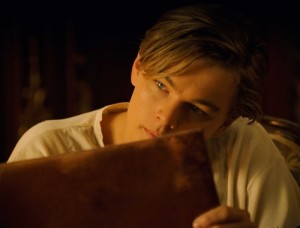 “When Jack (Leonardo DiCaprio) is preparing to draw Rose (Kate Winslet), he tells her to “Lie on that bed, uh I mean couch.” The line was scripted “Lie on that couch”, but DiCaprio made an honest mistake and James Cameron liked it so much he kept it in”

What a scoundrel. This picture coupled with that quote do funny things to my stomach.