Before I went to Zurich I hadn’t realised to what extent the Swiss knew how to party. They keep it quiet, giving the impression all they care about is cheese, chocolate and secret bank accounts, but they are well qualified to give lessons in How to throw parties to other less fortunate people. In the UK some think that all you need for a party is Radio One cranked up and a twenty-four pack of beer. The Swiss have realised that for a real 3-day party like Zuri Fascht you also need fireworks, stunt planes, a lake and funfairs. Concert stages, high-wire tricks, ethnic food and wakeboarding contests. Camels. Cocktails. High diving.  A daredevil helicopter pilot. And that’s just the start, as a local said to me during the half hour of fireworks, every time I thought they had ended. 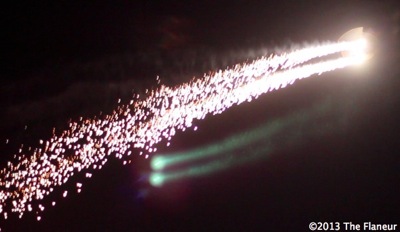 Fireworks fired from a helicopter. Flying above fireworks going up. Towards the helicopter. Mad.

Once every three years in July the Zurich Festival, called Zuri Fascht attracts over two million people to Zurich for one non-stop party weekend. It is the biggest festival in Switzerland and to put it in a UK perspective, attendance-wise it is bigger than the Notting Hill carnival with a couple of Glastonburys thrown in. Lake Zurich is an attractive backdrop and if you like street parties then it is a must-see event. Forget any stereotypes about the Swiss you might have – Zuri Fascht will explode them, along with the 120,000 tonnes of fireworks. This weekend at Zuri Fascht in Zurich I have seen people dancing on roofs and high-diving into a lake at midnight. Most shockingly of all I have been on a Swiss train that was slightly delayed. 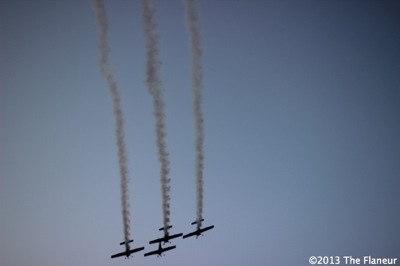 The heart of Zuri Fascht are the two enormous firework displays that take place on Friday and Saturday evenings. If you think you have seen fireworks, think again. This is one of the three biggest firework displays in Europe and over two nights Zurich blows up over 700,000 Swiss Francs worth of fireworks. Each evening’s spectacular lasts half an hour and the two shows are put on by different teams who have been working on them since March. There is some international rivalry as one is produced by Italians and one by Germans. Innovative Pyrotechnik have been fireworking since 1988 and created Saturday’s extravaganza which started with aeroplanes doing the sort of manoeuvres that made me queasy just to watch. Then parachutists descended holding lights, creating the illusion of new stars appearing in the sky until they got low enough to make out the parachutes holding them aloft. 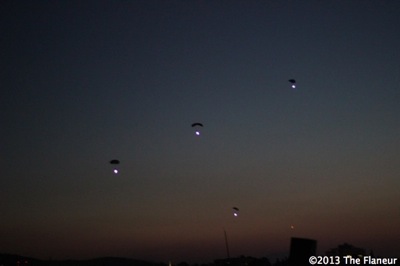 It also included a helicopter that flew over the exploding fireworks and released fireworks of its own into the mix. Earlier I had spoken to Joachim Berner who had created Saturday’s show. He told me the frankly easy-to-believe fact that it had taken three years to find a pilot crazy enough to take part. Both evenings’ fireworks were synced to music, both pop and opera. They unfolded in chapters, each having its own finale before leading to a crescendo, on Friday leaving the lake multicoloured and smelling of gunpowder, like a scene from the end of Apocalypse Now.  This is the end…my only friend, the end… 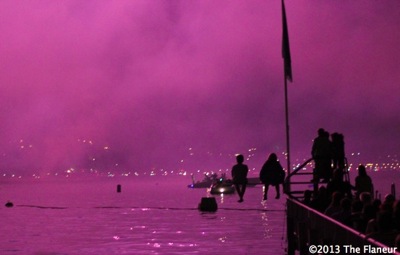 The fireworks are the highlights of a party that is on a scale that the Roman Emperors would appreciate. All day there are different musical events and happenings, with one hundred and thirty restaurants, three hundred food stalls and a square with seventy carousels. Most events take place on the lakeside, but also go into town, mainly along the River Limmat. Just by glancing at the map you can see that there are well over fifty different places playing music, as well as many different displays and shows, such as trampolining, Baywatch dancers and many, many more. Win cocktails here, buy enormous kebabs there, listen to a live band round the corner. Zurich Festival only happen every three years, and the energy is astounding. 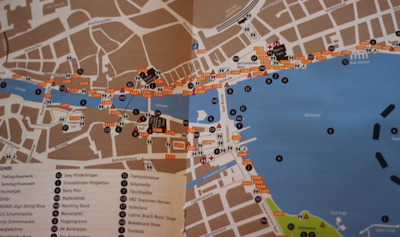 Even given the huge numbers of people I saw no violence and there was a very low-key police presence.  Public transport runs all night and if you’ve got yourself a Zurich Card then you can just hop on and hop off the trams and buses wherever you like. The city itself only has a population of 390,000 people and with five times this number coming to Zuri Fascht the streets around the river and lake are very busy. To move around Zurich more easily use the streets further from the water which are less crowded. 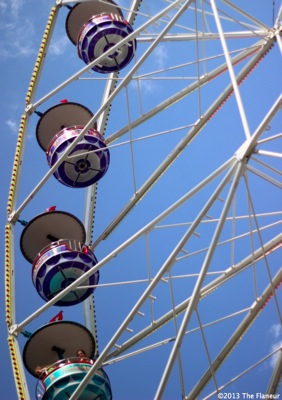 The next Zuri Fascht will be in 2016. It’s a bit early for me to say book your tickets now, but try and remember to put it in the diary you buy at the end of 2015. Tie a knot in your hanky. I’ll tell you what, The Flaneur will post about it at the start of 2016 so you can book a hotel and get your tickets sorted. Prost.