There’s a World Championship being played in England at the moment, although if you get your sports news from the BBC then you won’t know much about it. None of the TV channels are giving the Croquet World Championships the coverage it deserves, so I headed down to Roehampton to investigate.

Croquet as a recognised sport dates from the 1850s, but pall-mall, on which it is based was played in England in the fifteenth century. The game was so popular they named a street after it. Croquet’s got pedigree then, but surprisingly there have only been World Championships for the last 14 years. These have been held all over the world though England has hosted seven of the tournaments. This year they are again in our green and pleasant land at Surbiton and Roehampton. 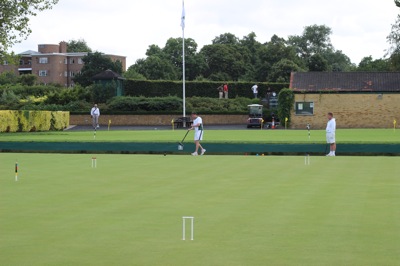 One of the perfect croquet lawns at Roehampton

Having played croquet a few times in my youth I arrived at Roehampton Club in south west London thinking that maybe a new career beckoned. If a player hadn’t turned up and the call went out for someone to make up the numbers I could take their place, win and suddenly lap up all the adulation due to a pro-croquet player. How difficult could it be?

The answer to that question is very, very difficult. There is a huge gulf between the sort of croquet you play on the lawn after Sunday lunch and what goes on at the World Championships. It is like the difference between a 1920s phone and the device in your pocket. They’re the same sort of thing and yet they’re very different.

When I arrived there was already action on one of the croquet lawns. A man in long white shorts was taking aim with a very hi-tech mallet. He had go after go firing balls across the lawn in all directions. There wasn’t an opponent to be seen.

I thought maybe he was just practising, but people were watching with more concentration than I would have expected if this was just a croquet ‘net’.

I realised I was well out of my depth. There are worse things than croquet in which to be out of your depth, quicksand being one that springs to mind, but I didn’t like watching something I didn’t understand. The rules that I knew seemed to bear no relation to what was going on in front of me. How could there not be an opponent? I suddenly had an inkling of what most people must feel at cricket matches.

It was five to three.The one man on the lawn continued hitting. He was still there on his own at five past. It was no good, I was going to have to ask what on earth was going on. I looked around. Many of the spectators, of which there must have been around forty looked a bit ex-military for the question I was going to ask. However there was a young man nearby who looked like he wouldn’t have me thrown out of the club for not understanding the rules.

‘Could I ask you a very basic croquet question?’ I asked.

‘I’m not really the right person to ask,’ he demurred, nodding towards a row of people in white kit with the names of croquet clubs embroidered on their jumpers.

I guessed he knew more than me. Anyway it was a simple question.

‘Do you know when they will start to play a game?’

It turned out it had a very simple answer.

‘They are playing a game,’ he explained good-naturedly. ‘Quarter-finals.’

‘It’s just that they’re so good…’ he added – as though to mistake a quarter-final for a practice session happened all the time – ‘…each go lasts for ages.’

I looked back at the lawn with the one player striding around. But where was his opponent? Surely no matter how good the players, they still need someone else to play against?

‘What I can’t understand,’ continued my croquet explainer, not realising he was about to help my understanding inordinately, ‘is that when it’s not their turn they go to the pavilion and have a cup of tea. They don’t watch.’ 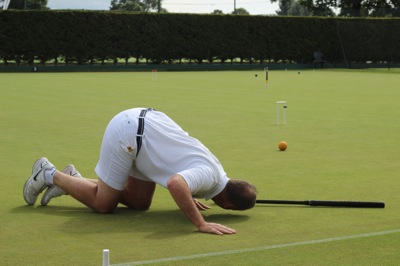 It was strange. Eventually the player crouched by the hoop in front of me and looked at it carefully from ground level. Then he played a careful dink that didn’t seem to achieve anything and walked off looking pleased with himself. From the pavilion another player walked on, Great Britain emblazoned on the back of his shirt. There was an opponent! Things were beginning to make sense.

The new player walked over to his ball – in the far distance in the picture above – looked at it and waved his mallet in the air.

An elderly gentleman sitting the other side of me noticed our confusion.

‘The ref is checking if it’s wired,’ he explained. Which was kind, but was the sort of explanation that needs its own explanation.

‘You always have to leave the player the chance to hit both sides of the ball. Otherwise he can move his ball right up here.’ 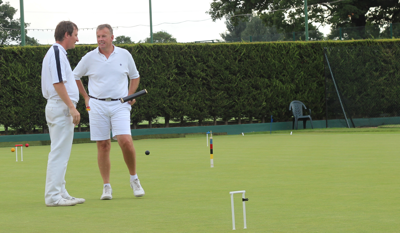 James Death and Reg Bamford on the lawns at Roehampton

So rather like a snooker in snooker, but frowned upon rather than applauded.

‘Could change the game.’

After lengthy deliberations the ref announced that the ball was not wired, and it had to be played.

‘Clear the area!’ shouted the long-trousered player, who I now know was called James Death. He was several metres away and aiming a hard ball straight for me and my elderly friend. We moved out of the firing line, which was a good call as the ball missed everything on the lawn and rocketed towards where our feet had been.

‘I’d have had a broken ankle,’ the elderly man commented.

After his unsuccessful shot Death went off. That’s how I remember playing croquet. One shot, miss everything, next person’s go. The other player came back on. His previous turn had lasted at least twenty minutes. He was clearly quite good at croquet.

‘Do you know this man’s name?’ I asked the elderly expert.

He paused as though I should know who Reg Bamford was. I didn’t, so for some reason I just repeated the name.

‘Current World Champion and number one in the world. He is so much better than the next man. If I played him I wouldn’t get a point.’

Ah. So my question was a bit like going to Wimbledon and asking who’s that Scottish fellow.

Bamford continued to roquet balls and slip through hoops all round the lawn. His number one status was easy to believe. The balls glided to within millimetres of where he intended. He started to line up behind both his yellow and red balls.

‘He’s doing a peel,’ the elderly gent said in excitement. ‘A sextuple peel.’ He paused. ‘There are only a handful of people in the world who could attempt it.’

There’re also only a handful of people who know what a sextuple peel is. And I’m not one of them. Realising this he continued, waving quickly at different parts of the lawn.

‘Anyone want to bet on me?’ James Death asked drolly as Bamford got nearer to victory. Then there was a ripple of applause. Bamford was through to the semifinals. Another step closer to retaining his crown.

‘Maybe next year,’ someone advised Death.

He walked onto the lawn and congratulated his opponent. The audience went off in search of sustenance.

Once you know what’s going on croquet can be enthralling, although if one person is absurdly good it does become a procession with the other player unable to do anything about it. Will croquet take over from football as England’s national sport? That’s a few years away, I would imagine. But it’s certainly worth going along and watching a match, although from my experience, if you once played years ago and think you know the rules, you probably don’t. You can check the official regulations here. The final is on Sunday at Surbiton Croquet Club. Maybe I’ll see you there.

1 Comment on A neophyte at the Croquet World Championships