Reels from Life Two Or: How We Learned to Love Postmodernism by Screen Bandita was at Summerhall on Sunday 5th August as part of the Edinburgh Festival Fringe.

Screen Bandita deal with ‘real film’, the ‘real’ demonstrative of the need – in these digital days – to define just what one means with the use of the word ‘film’. In the past there was no need to make this distinction – film was simply the material to be projected and the only means of experiencing the moving image. When you go to the cinema, are you sure you’re watching a ‘film’? When you’re at home, settling down to watch your new favourite film on DVD, are you really watching a ‘film’? The medium employed to enjoy that most marvellous thing – cinema – is most often a far cry from the whirr of the projector and reels of celluloid.

Screen Bandita aim to reintroduce us to the marvels of what is often considered an archaic medium, by searching high and low for ‘previously abandoned’ reels of Super 8 and projecting them for our viewing pleasure. In the case of Reels From Life Two these films are discarded home movies, rescued, re-contextualised and accompanied by the sweet crackle of wind – up gramophones. 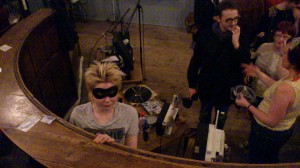 Screen Bandita’s Lydia Beilby (pictured, left) and Leanora Olmi split the tasks of music and projection between them, the former rather deftly winding up and cueing each delightful ’78, whilst Olmi – with her head torch giving her the appearance of a celluloid miner – aptly handles each reel. Sitting above them in one of the marvellous lecture halls in Edinburgh’s new multi-arts venue, Summerhall, I was fascinated to witness the exchange of glances and small verbal cues between these two Banditas as they built up an environment of curious wonder. Indeed it must be curiosity that motivates us to an event that allows us to see the home movies of strangers and abandoned documentary footage. Akin to analogue VJ-ing, each combination of sound and image was superbly chosen, particular highlights being a double exposed road trip accompanied first by birdsong, then Javanese Gamelan and ending with the sound of Big Ben chiming. Part 2 of the show included a wonderful home movie of a trip to Coney Island along with a soundtrack of Only You by The Platters.

Having been to several Bandita events I always feel that it is the experience of seeing the activity of projection and live or gramophone music that affords a large part of the enjoyment. All too often we forget about how things work, when presented so much of the time with a pleasing interface to assist/entertain us. One could argue that the sound of these analogue machines clicking, whirring and crackling and the practitioners using them is a performance in itself and an essential part of the charm of their endeavour.

Reels From Life Two was programmed at Summerhall, the former Royal (Dick) School of Veterinary Studies that has been transformed into a multi-arts venue and creative hub. Boasting studio spaces and myriad rooms hosting theatre, art, film and music during Edinburgh Festival Fringe, Summerhall is an exciting and fascinating space. In the coming weeks I look forward to discovering what it has to offer, in particular their film programme. If Screen Bandita are anything to go by, it promises to be a strong selection.