Located above the Oxford Arms on Camden High Street the Etcetera claims to be London’s smallest fringe theatre, seating 42 people on well-raked, comfy seating. During the Camden Fringe it has several productions a night and is an ideal place for theatre lovers to see a double or even triple bill of plays. I visited last night to see Photograph, followed later by Fishcakes, two works that are approached very differently but have similarities, both featuring young women trying to make sense of their lives and relationships. 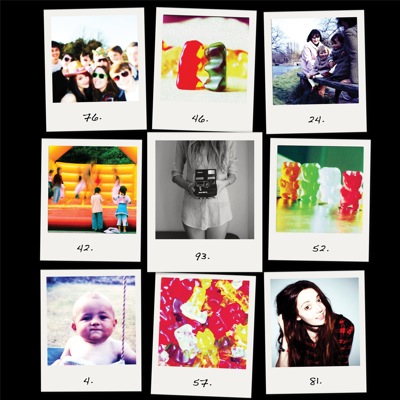 It’s not often that you’re handed a bag of sweets as you enter a theatre but that’s what happened at the start of Photograph. The authentic quarter-of-cola-cubes-please bag contained a handful of gummy bears. These were chosen deliberately as they contain gelatine, which is also a component of photographic film. This is relevant as Photograph, a one woman show written by Grace Davis and James Docherty,  is a meditation on the power of photography and its impact on us, framed within a monologue about a young woman’s life.

Tanya Reynolds gives an intense, energetic performance as Sam, a woman over-sharing about her life with the audience. She starts off overly enthusiastic, a bit hyper, as though the giggles are covering something – eventually we discover that is the case. It’s an engaging performance, driven by a whiteboard of photos that she comically brings on stage at the start and uses to kickstart stories about her life. Interspersed with taking Polaroids of the audience she pulls images off the board and tells us about them. Other people’s snapshots are usually deeply dull (this is us in front of the Taj Mahal…and this is us just round the corner from the Taj Mahal…), but here they are the catalyst for a lifetime’s unburdening as we learn about Sam’s life and her views on the reality of photographs and memory.

Reynolds holds the audience’s attention for the duration of the long monologue, whether reminiscing about childhood, talking about her relationships or eating gummy bears. Filled with humour and a little audience interaction there is a real sense of intimate sharing. The writing is tight and evocative but it is the performance that makes the piece.

After a half hour break to cool down – the arrival of summer is fantastic but does make packed theatres a little warm – it was time for Fishcakes, a new play by Elizabeth Bartram. She also stars with Callum McKeith in a tale of a relationship that grows from a blind date. Jen is an outgoing girl, as likely to tell you her star sign as her name. Reece is a gentler character, happy with his two Playstations, year-round panettone and – more peculiarly – watching high-heeled girls falling over, (it seems it happens more than you’d think). Of course happy couples that stay happy aren’t very dramatic, but though the ultimate destination is clear most of the play does show the happier side of relationships. The two actors manage to keep us interested in even the relationship-realism of lolling around watching TV and arguing about what is the best board game. They also remind how delicious fish and chips can be. Eat before you go to the performance – not only do Jen and Reece pick at a panettone, they get fish and chips from Poppies in Camden and eat some of them on stage. It’s hard to watch if you’re feeling peckish. 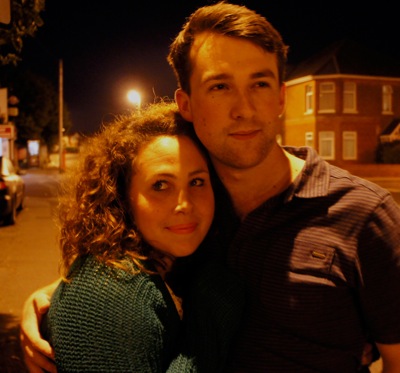 Tea chests make a simple but effective setting, being moved around and covered to make beds and chairs. Bartram and McKeith are a believable couple as we watch them develop together from awkward first meeting through the different stages of their relationship. Bartram has written a script with witty moments and much that rings true, including a night club scene where they have to shout over music to make themselves heard. The designation of a fish cake as unmasculine seems odd, though disagreements over things as petty as fish cakes will be familiar to all but the most saint-like humans. (Although I gather even most saints aren’t that saint-like if you have to live with them.)

Robert Wallis plays an unnamed third character. He sits at the side of the stage, unacknowledged by Jen and Reece. He occasionally moves props or comments, but mainly just watches indulgently. He is omniscient and seems to be a Wings of Desire type angel, watching over the couple, wishing he could help with the difficulties of life. But this element is left under-developed – he could just be a mate they are unable to shake off…

Bartram and McKeith give well-pitched performances and though the denouement feels rushed and doesn’t develop directly out of what we have seen, Fishcakes is a well-observed view of a modern relationship that eschews big moments and focuses on the everyday.