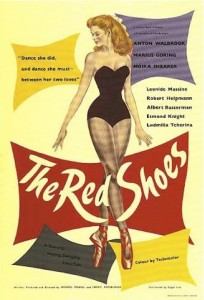 Juliette Binoche has turned to dance, but you don’t have to be up on the latest rumba developments to enjoy the delights of this great film. One of Martin Scorsese’s favourite movies, and when the director of Raging Bull cites it as an influence – he claims the choreography helped him shoot the fight scenes in his own epic – you have to take note. The universal themes of innocence destroyed, the danger of desire achieved. Powell and Pressburger’s great ballet movie has it all.

Love. That great killer of ambition and creativity. A ballet impresario, a Simon Cowell of the forties, holding the careers of dancers in his cold grasp. Surrounded by lawyers he steals the work of a young composer. Artistically sterile, he uses the talents of others as his raw materials – I want to create, to make something big out of something little. I will make you the greatest dancer in the world this Leomontov ruthlessly tells his ingénue Vicky, demanding she keeps her art pure. He knows with Shakespeare’s Valentine, that love Made me neglect my studies, lose my time, War with good counsel, set the world at nought. But she falls in love forgetting that Love is your master, for he masters you. Leomontov reponds with harsh advice. ‘ A dancer who relies upon the doubtful comforts of human love can never be a great dancer. Never. ‘

Produced in 1948, it seems a Technicolor escapist treat, taking cinema goers away from their powdered eggs and half ounce of butter. It is a colourful delight, a whimsy of bleating colour. But this is Anna Karenina for the atomic generation. Do we have control over our lives? Does fate toy with us? Vicky has strapped on Hans Christian Anderson’s Red Shoes, and we know where that will lead her. Are we all forced on by something we cannot understand, forced to make decisions we regret, saying with Paul of Tarsus, I don’t understand what I am doing? For I don’t practice what I want to do, but instead do what I hate. What should we make the aim of our life?

Using long tracking shots and quiet editing they bring the reality of existence to the front. But in life there is no final bow. No score to follow, to read and practise.
You might imagine that a film with a 15 minute balletic interlude wouldn’t be a box office hit. You’d be right. It bombed when released. But it now resides at 9th on the British Film Institute’s list of best British films. The future mocks our early years. After devoting his life to ballet the composer decides there are better art forms than ballet.
The red shoes has no optimism. Two years after their more buoyant masterpiece A Matter of Life and Death, they have lost all hope. The film’s message resounds today. You will be unhappy. If you get what you strive for – you will be even more unhappy. If Emma Bovary had seen it she may have been saved.