‘Dandelion’ opens with a blinding banjo driven ‘Amy Sharpe’. It was not what I expected. It’s not a criticism in any way. It was just a surprise, a pleasant surprise. However, the next tracks followed the more traditional route and highlighted Becky’s mellifluous tones and songwriting skills 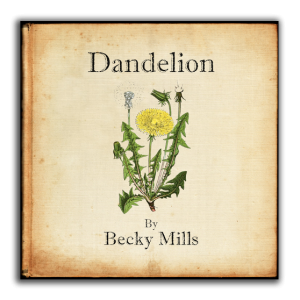 However, it is not always what it seems and underneath this initial supposed sweetness and light, is a darker underbelly. ‘Pretty Young Things’ explores lost lives in a world where ‘Old men want their pretty young things till their bright little faces fade’ and desperate women in a pained world  resort to ‘dancing that only requires tits and teeth.’

‘Monkey’, the final song, complements it with its bitter plaintive lyrics. For me this was the greatest track on the CD and I still cannot get it out of my head. It haunts me as I write. Of the other songs,’ The North Wind Will’ echoes the pace of ‘Amy Sharpe’, ‘Dandelions and Foxgloves’, ‘Princess and the Pea’ in contrast, offer a more traditional folk approach in both form and content.

I am not alone in praising this album. Mike Harding said ‘I played this this lady’s CD twice …on a long drive home. I don’t remember when I was so amazed at a singer/songwriter’s work…’she sings from the soul’.

In addition to her  musicianship, Becky Mills is a strong storyteller feeding on her observations and emotions. In some ways, her narrative expertise reminded me of the earlier songs of Al Stewart. All the songs on Dandelion  were written and  recorded in Becky’s  Knaresborough flat  (you can hear street sounds if you listen very carefully) and Active Audio Studios in Harrogate and features quite a few of her  very talented friends. Overall, it’s a fantastic album, rich in both musicianship and artistic sensibility.