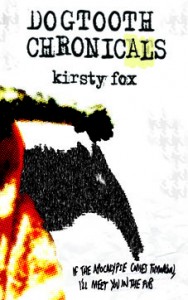 “If the apocalypse comes tomorrow, I’ll meet you in the pub.”

On the eve of waiting for the delivery of 500 paperback copies of my debut novel, I ponder how many people will tell me I’ve a typo in the title. The trouble with self-publishing is the sceptics are looking for signs of shoddy, amateur products and why shouldn’t they when every man and his dog can pop their literature up for sale on the internet these days? So just to clarify, there’s a slightly made-up word in my title (referring to chronic, rather than chronology). And my book is littered with dialect that doesn’t even have the decency to contain apologetic apostrophes. If you want sommat to whinge about on the subject of modern language, there’s plenty of fodder here. Because I love language, idiosyncrasies, idiolect, dialects and emphatic use of swearwords. I love the history of language and the future of it. Evolution.

You can’t stop evolution. Even the noble paperback book is changing. But don’t put any nails in the coffin yet. Is vinyl music dead, or is it a prized collectors’ object?

Dogtooth Chronicals is the debut release from my pet project Bees Make Honey independent publishing. It concerns the lives of characters unable to commit to a conventional future, instead they’re gifted a minor apocalypse, shades of dystopia and a test of their survival instincts. It’s a reflection on a hopeless generation littered with magic realism, cynical Northern humour and the hair of the dog.

It is, I hope, an unusual book. As such I’m planning an unusual book launch. In the whisky-sozzled spirit of the characters lives there will be live music, film, dancing and bloody good beer. I’m holding it in the basement café bar of Nottingham Contemporary art gallery – a particularly good spot for combining a mish-mash of creative spheres – on 26th October. Between now and then I’ve just a few hundred things to do to get ready. Being an indie-publisher is like trying to solve a Rubik’s cube of multi-tasking, prioritising all the right aspects to align the pretty colours. Staying up late with square eyes and mad hair trying to sound jaunty on social media sites. Making endless lists so that all the boring little details get ticked off as well as the exciting stuff.

So, if you happen to be in the Nottingham area at the tail end of October, you are most welcome to pop by for cake & fizz, details here…

The Thrill of Waiting up for the End of the World