Arezzo is a delightful Tuscan hill town that could be visited to see beautiful medieval and rinascimento architecture as well as to enjoy some pappardelle all’aretina and the local Chianti. But there is another reason why many people make the trip to Arezzo every year. The Basilica of San Francesco contains a cycle of frescoes by the Early Renaissance master Piero della Francesca.

Outwardly the church is a gruff, honest building, dating from the end of the 13th century. It is plain and unadorned sandstone, hardly preparing one for the sights inside. 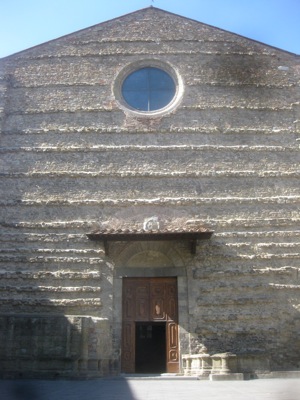 The frescoes were begun by Bicci di Lorenzo in 1447, in Bacci chapel behind the main altar, but he died in 1452 after only painting the outside of the chapel and the Evangelists. Piero della Francesca took over the huge task of painting the frescoes, a job that took ten years. He worked on the project in two stages, sandwiching a long break when he was in Rome. The frescoes were finally finished in 1466.

The story chosen for the fresco cycle was the Legend of the True cross, a tale of how the relics from Jesus’ cross arrived in Europe. The source for Piero’s work was the Golden Legend by Jacobus de Voragine which gave him more than enough material to fill the large wall space that had been allocated to the frescoes.

According to the Legend, Jesus’ cross was made from the wood of an apple tree planted in the Garden of Eden on the death of Adam. This is the first scene in the story, and is the top image on the southern wall of the chapel. Photos are not allowed in the chapel, but there are good representations of the full images here. Piero didn’t stick rigidly to the chronology of the story, but allowed his love of maths and symmetry to shape the order of the scenes he painted. In particular he balances two great battle scenes on the two side walls of the chapel. These represent two big battles when Christianity defeated Pagans, firstly Maxentius fleeing from Constantine…

…and secondly Chosroes of Persia being defeated by Heraclius.

These great battle scenes face each other across the chapel, both on the lowest level – which is still well above head height. As such they are the easiest to see, the details of the fighting seeming out of place in a chapel. One man stabs another gruesomely in the throat. A horse’s tail is spattered with blood. This realism was something new. It shocks now as it must have done when it was first unveiled. There is damage to some of the Frescoes, but this is to be expected as the whole church has suffered over the centuries, even being deconsecrated for a while. The frescoes are in the spare, coolly calculated style that Piero aficionados so admire. Blue Arezzo skies figure everywhere. Arezzo itself even stands in for Jerusalem in the scene where the Cross is dug up! 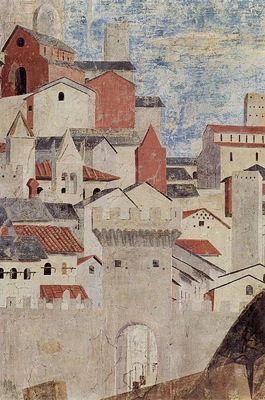 After Adam dies an apple tree is planted in his mouth. So from Adam – the cause of Man’s downfall – grows the tree on which Christ would ensure the resurrection of man. As such Piero places the Cross being paraded back into Jerusalem by Heraclius directly opposite the death of Adam. Both images are high up near the ceiling and hard to examine in depth. Adam’s death in particular is badly damaged with much of the left hand side missing. The image is divided by the tree of life, symbolising the victory of Christ over death and the damage adds a poignancy that Piero will not have intended. On the other layers of the fresco Piero balances images on opposite walls.

An acquaintance with The Legend of the True Cross  is necessary to an understanding of the fresco cycle, although it is rather difficult to summarise. After Adam, and painted directly underneath, the Queen of Sheba discovers a piece of wood which she realises will be used as Christ’s cross. Solomon has the wood buried. Constantine dreams that he will have victory in his battle with Maxentius, who is put to flight by the Cross. Constantine’s mother, Saint Helena visits Jerusalem to discover where the cross is. Judas knew where the cross was buried and after seven days in a dry well he reveals the location. Three crosses are dug up, and one performs a miracle, thus revealing itself as the True Cross. The King of Persia, Chosroes had used the cross in his own throne room. Heraclius fought him and brought the cross back to Jerusalem.

Piero paints all these scenes and then finally, and stepping outside the realms of the legend, he painted the annunciation of Mary, as though concluding his version of the story of mankind.

Written down the story is a peculiar mixture of symbolism, and viewed in the chapel it has images out of order and is hard to follow. Nevertheless the painting manages to transmit the calm sense of serenity with which Piero imbued it over 500 years ago. His sense of colour is superb, as is his ability to compose scenes harmoniously and with great sensitivity. He utilises the mid-15th century painter’s tools with an ability which gives even the least of his characters real humanity and reality. The Arezzo frescoes are renowned as one of the great achievements of the early renaissiance and it is a great relief that they have survived.

Images are taken from the The Yorck Project: 10.000 Meisterwerke der Malerei, licensed under the GNU License

A full depiction of the frescoes is available at this website.