For most artists their canvas is their canvas. For art duo Expanded Eye that idea is the oldest of hats. Their canvas is, amongst other things, their skin. Most artists will regale you with their belief in their work, but not all would put their epidermis where their mouth is and have their work permanently inked onto their bodies. That though is one of the working methods of Jade Tomlinson and Kev James, aka Expanded Eye. 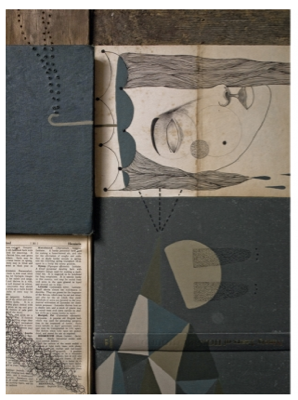 Expanded Eye’s new solo show is at Arch 402 Gallery, a large, sensitively converted railway arch near Hoxton Station. Called ‘A Thousand Fibres’ it is only on until the 29th October, so get there quickly. The opening was last night and you can see images from the party here.

‘Every piece of work in the show is based on a tattoo,’ explained Jade, proving the point by showing a shoulder on which was an exact replica of one of the images on the walls. 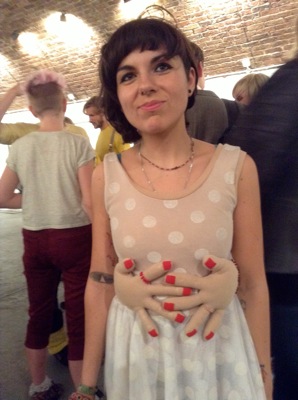 Expanded Eye work as tattoo artists, creating unique designs with an often surreal air. Sometimes there’s a touch of Miro, a dab of Klee and even, occasionally, something of W. Heath Robinson to the images. Their fine art work mixes unusual grounds and materials, abstract assemblage, careful inking and placement to create works that fuse story-telling with visual poetry. Shown on the wall, yet sculptural, images are drawn on carefully constructed salvage which allows a multitude of textural qualities that aren’t obtainable when working with skin. Locks are left on the parts of doors that are used, old books sit under the images, nostalgically speaking of memories and ideas from generations past that may or may not still be current. New uses are found for that which probably thought it had been thrown away and was of no more use to anyone. (That only makes sense if old doors and books can think, which I know science hasn’t proven. Yet.)

Contemporary brass marching band Perhaps Contraption entertained the hordes with bright songs from their album, the cover of which had been designed by Expanded Eye. There was such a Felliniesque feel at one point I hoped Marcello Mastroianni would wander in.

Unfortunately he didn’t, but you can, by visiting…