Protest marches through London are slick affairs. It’s no longer a case of turning up, singing a few songs and waving banners. When the police have been informed in advance the whole procedure is startlingly professional. A lorry full of cones drives in front of the marchers and every few metres a man leans out and places a cone on the ground. 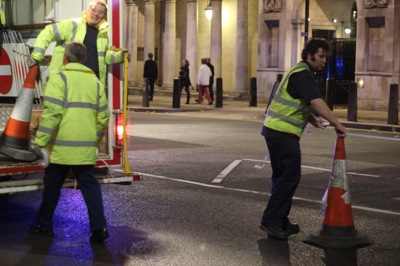 Another man walking between the lorry and the marchers stretches white tape from cone to cone. In this way traffic can continue using the other side of the road, and only the section of road that the marchers are actually on is closed. These were the only men allowed on the recent Reclaim the Night march. Otherwise it was women only walking down the central London streets from Bedford Way to Whitehall. 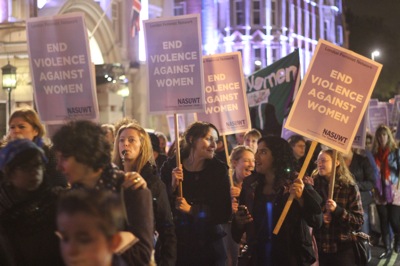 It was a noisy affair, with whistles and modified football chants – We love you [Insert name of football club here], we do being changed into We hate you sexists, we do. Billed as part of the ultimate feminist weekend of the year, the march aimed to ‘shout a loud NO to rape and all forms of male violence against women’. Statistics quoted by Reclaim the Night include: every week two women are murdered by a male partner or ex-partner and one in four women live with domestic violence. Supporters of the march include the TUC, NUS, and the London Feminist network. You can see more images from the march here.

When a lot of people are chanting it can be hard to make out what they are saying. I took a long time to understand what the marchers were enthusiastically shouting. It seemed to be, ‘R – S – V – P – intersexuality,’ but that made no sense unless they wanted people to write to them, which seemed unlikely.  I listened again.

‘R – S – E – V – P – T, intersexuality,’ seemed to be the call, but that didn’t make any sense either. After a few more chants I realised that the first word was Respect –  ‘R – E – S – P – E – C – T ‘. Once I’d figured that out I hoped to understand the second half, but the chant died down and was replaced with the easier to understand, Say it once, say it again, no excuse for violent men.’ This was bellowed in my ear as the march passed, which isn’t a welcoming soundtrack and seemed to get a bit personal. I have recently done a Body Combat class at the local gym, but that’s about it. 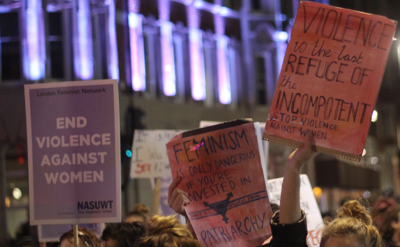 Violence is the last refuge of the incompotent

On Charing Cross Road theatre-goers held their tickets in one hand and searched for their phones to take pictures as the march went past.  On the website it says that all women are invited. That seems fairly clear, but in case it isn’t it then lists the sort of women that are welcome. These include, ‘…women of all colours and cultures, of all religions or none, women of any age, disabled and non-disabled women, heterosexual women, lesbians, trans women, bisexual women, refugee and asylum-seeking women and any other women you can think of.’

This everyone but men attitude is understandable but divisive and paints men as the Other, a general enemy. Men were invited to stand at the Edith Cavell Memorial, but you’ve really got to know your London monuments to know where that is.

‘What a brilliant march,’ said one of the policemen who had been guiding the protestors as the march ended in Whitehall Place.

‘Thank you very much, women,’ megaphoned one of the leaders, adding something that sounded very like ‘Power to village.’ I doubt it was that though, so if you have any idea what it could have been please weigh in below.

1 Comment on London Protest March: Reclaim the Night – ‘What a brilliant March!’