When the Victoria and Albert Museum puts on a show it doesn’t hold back and this autumn’s subject for the V&A blockbuster treatment is Masterpieces of Chinese paintings: 700-1900. It will run until 19th January 2014 and is a huge overview of one of the world’s great artistic traditions. From small intimate works to scrolls over 14 metres long the show includes some of the earliest surviving Chinese paintings, many being seen in Europe for the first time. 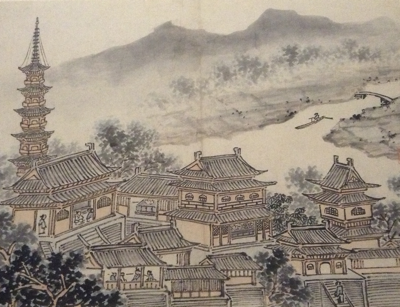 Covering 1200 years of a non-Western art tradition, the curators have accepted that the audience will not be as knowledgable about the work as though it was another Impressionist exhibition. Large explanations introduce each section of the exhibition, which has been set out chronologically and divided into six successive periods of Chinese artistic development. This makes it easy to understand some of the changes that have taken place over the centuries. There are a few works on paper, or taken from albums, but the vast majority of pieces on display are either on scrolls or banners.

The exhibition starts with some banners made for temples by anonymous artists. Painted on silk and rendered in bright colours these are the earliest works on show, from 700 – 950AD. Dense imagery creates patterns, almost comic-book styles decorate some of the edges and some pieces even incorporate embroidery.

Realistic observation of emaciated horses and landscapes demonstrates a change in subject matter after 950AD. There is also a reduction in the use of bright colours, with a more monochromatic aesthetic taking hold. Huge, detailed landscapes appear for the first time, to become part of the Chinese tradition – including a vibrant Sim-City type work of Prosperous Suzhou later in the show. From the 18th century this work by Xu Yang draws on Western use of perspective and shows the impact of European painting on local artists. It seems amazing that any of these works on silk have survived. It appears that many were created for ceremonial uses and so were on display relatively little even when they were newly created. 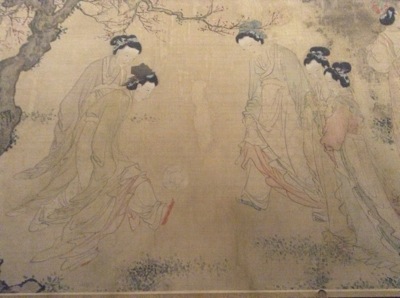 Are there any images of men playing football? No there are not. Is this not proof that (a) football was invented in China, and (b) women’s football has existed for longer than men’s? Further along the same scroll the women are depicted playing golf. It’s a can of worms, but maybe golf was invented by women…

As well as the ancient images the exhibition includes a video explaining how silk is prepared for painting and how an artist goes about painting on silk. There are also examples of the stamps that are used by collectors to signify their ownership of paintings. This is a large, informative exhibition with lots to see and plenty of explanations to read. Go with plenty of time and enjoy the ethereal images.

There is an informative podcast that can be downloaded here all about the exhibition.

More details about the show.