Maybe I have been going to the wrong exhibitions, but I have never before taken part in a knitting installation. Neither have I had my photograph taken wearing a hand-made balaclava. Or been offered a goat cheese truffle. Or seen an artwork made of fish. All of which happened at the Sluice Art Fair which is on at 47-49 Tanner Street for the weekend of 19-20th October. It’s an engaging blend of contemporary practices with a welcoming experimental vibe.

For this weekend the three floors in the reclaimed Victorian industrial building run by arts organisation 47/49 have been given over to contemporary art galleries. They are from around England and the world and have grabbed the opportunity to show works that will intrigue and amuse. An art fair for artist/curator run galleries this is the place to find performances and projects as well as painting, film, sculpture and installation… 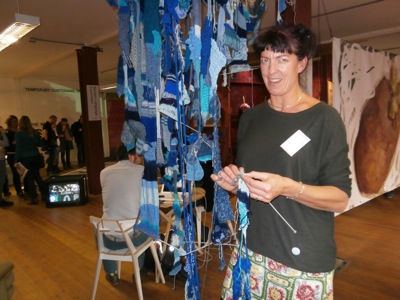 Blue Jumper by Sarah Filmer. Go along and join in!

There are different art performances all day, including Free Balloons from Rosie Blackburn of the FBI and Blue Jumper by Sarah Filmer, both of which are interactive. Free Balloons only needs the skill to ask for a balloon, but Blue Jumper is an ongoing knitting piece exploring participation and memory. It requires the ability to knit to take part, but it’s easy to pick up – in only ten minutes I managed at least seven stitches. Google claims there are 75,000 stitches in an average jumper, so it will be a while before I’m knitting my own clothes. FYI, type How many stitches in the average… into Google and before you can type jumper you will be given the suggestion C section. Turns out there are only 32 stitches in the average C section. (Which doesn’t mean the beginner should start with a Caesarean before moving onto jumpers). 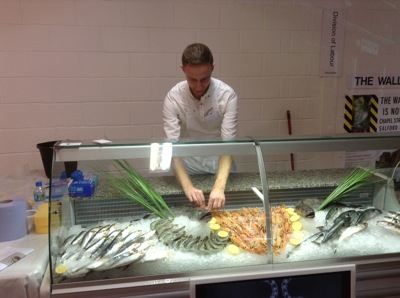 You may not have heard about the Centre for Innovative and Radical Fishmongery, but if Sam Curtis has his way you will do. Having previously embarked on an unofficial artist’s residency in the fish department in Harrods, (Why would my computer autocorrect Harrods to Harrodsburg? Am I really more likely to be referring to a town in Mercer County, Kentucky, population 8340?), he has brought his fishmongery skills into the gallery. A new method of mark-making – ‘My medium is fish…‘ – also looking at creativity in work environments that are not usually classed as creative. 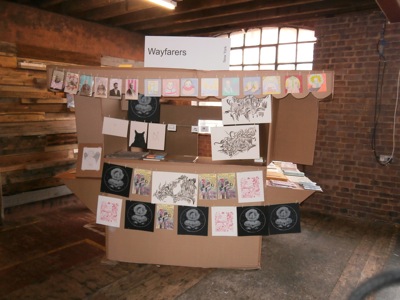 The BrooklynWayfarers stand of works on paper

Jim Ricks Projects is not a gallery but a curated experiment showcasing Irish artists, including the digital manipulations of the marvellously named Nina Amazing. Looking at issues of imitation, permission and legalities professional tattoo artist Toby Caldicott will also be creating Free WuTang tattoos for members of the public.

This is just a glimpse of the over thirty different organisations that are showing work at Sluice. It’s only on for two days, it’s free to get in, so hurry to Tanner Street.