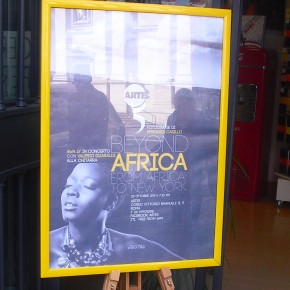 It would be easy to miss the Beyond Africa: From Africa to New York exhibition if you walked past it without paying attention, tucked away as it is in a corner of Arte5, a bookshop on Corso Vittorio Emanuele II in the heart of Rome.

Arte 5 is seconds away from Piazza Venezia, down towards Largo di Torre Argentina, and is one of my favourite Roman discoveries thus far. At the moment it is somewhat overshadowed by unsightly scaffolding, but the pop art/comic book window display still manages to stand out – just.

I am a frequent visitor to the shop, regularly spending far too much money on hardback photography tomes and retro notebooks. I happened upon the Beyond Africa display by chance during one of these excursions. It caught my attention because in the summer of 2008 I spent a month on the west coast of Africa, in Namibia. It was an enriching experience, and unexpectedly catching a glimpse of elephants at a watering hole, or a woman stood on the edge of a savannah with birds flying around her while I am browsing through modern art books instantly reminds me of the beauty I witnessed there.

The exhibition is focused on Kenya  – which I have never visited, but the images are the same – and New York. Artist Speranza Casillo was hosted by the Maasai tribe in the Chyulu Hills, and this is where her photographs were taken. The New York pictures are of a side of the city that we don’t often see – the peeling outside of a Laundromat is one that sticks in the mind afterwards. Essentially, this New York is less than salubrious.

A large frame flanking the front window of Arte5 shows two images. One is of a dark African skyline, with nothing but a single tree protruding from the ground and angry clouds circling above. The other is of a cheetah, presumably about to leap on its pray.

I am at loathe to point out the dramatic contrast of the photographs, however there is no escaping that this is what the Beyond Africa display is entirely based upon.  Casillo’s art has been described by Luca Belpietro of Campi Ya Kanzi, an eco-lodge in the Chyulu Hills, as ‘the quintessence of African beauty and hardship… She superbly combines the yin and yang of Africa, the smiles and tears on this continent.’

Walking into the section of Arte5 that houses the exhibition, I am directly faced with the New York photographs. Starting from one end of the room, therefore, they are in the middle – so we have tribal children, a monochrome savannah, a majestic cheetah, and then a line of yellow taxis hemmed in by skyscrapers, the towering headquarters of Apple, and the Statue of Liberty with a jet skier passing in front.

It seems that, despite their differences, both these landscapes are dangerous. Sky-high New York buildings give an impersonality –breathtaking, yes, but people have little to do with these photographs. Yellow taxis press together chaotically; there are obviously thousands of people in this scene, but they are too deep inside the mass to be captured by a camera lens.

The juxtaposition is found at every level – between the urban New York, which is decaying, and the Kenya that is vital, cheetah-esque and alive; between American history and modernity, with a dirty street sign pointing out Broadway and Fifth Avenue set in front of a church spire (eighteenth century perhaps?); between the animal and human and nature when a woman stands on an African desert rock, surrounded by lions. In Central Park, ducks float on a lake that appears to be littered with rubbish – or is it a school of tiny fish? It is hard to tell, but skyscrapers are reflected in the water. Next to them, smiling Maasai children, beads around their necks, speak for a whole continent.

In New York a Starbucks sign is lit, a ferry crosses in front of the famous skyline, a bridge is flanked by the Stars and Stripes, and then suddenly we are on the next wall and back in Kenya, a monochrome Maasai with a cape flowing behind him, holding aloft what seems to be a spear. Does this shift, I wonder, reflect how startling it would be to thrust amongst either the New York lights or the Maasai warriors for real? Could the woman gazing up at the Starbucks sign, hardly in the photograph at all, reflect the immigrant experience?

The colour choices reflect each other too – many of the Kenyan photographs are in monochrome and a lot of the New York ones are dark because the pictures were taken at night.

Underpinning all of this is the question of the battle between civilised and uncivilised, which brings up a whole debate of its own. There is beauty in the untamed bleakness of Casillo’s Kenya, but what of the New York scenes? A different kind of respect is had for the silver buildings that stretch up into the dark sky, and for the cultural associations of Broadway and Fifth Avenue. But when the signs pointing them out are dirty and are surrounded by graffitied newspaper stands, would it be a stretch to ask if Casillo may be commenting on the out of control nature of both of these landscapes?

My conclusion is yes, and that the exhibition is depicting, like the sign outside a run-down New York nightclub, the ‘Village Underground’ of both these continents – whether it is tribal, or simply neglected.

1 Comment on ‘Beyond Africa: From Africa to New York’, Arte5, Roma