After School Midnighters is a CG Japanese anime that tells the story of an anatomical model called Kunstlijk. Kunstlijk lives in St. Claire Elementary School and he and the other occupants come alive at midnight. Kunstlijk has a sidekick called Goth who is a skeleton and it is their relationship which is the backbone of the comedy.

The story focuses on three little girls who each have their own personalities. Mako is a bundle of energy, who runs around the environment in glee. Mi is a stuck up little madam and Mu is the silent intelligent type who likes to collect insects.

These girls attend the school and put Kunstlijk through hell. They attempt to destroy him through playful games and graffiti all over him. The relationship between the girls and the anatomical model is tense, but the girls have a major role in Kunstlijk’s future.

The girls go on an adventure throughout the school to find three medallions on behalf of Kunstlijk and Goth. They meet various characters who bring the film to life and act as antagonists. The story is somewhat elaborate, but in keeping with the playful nature of the film.

After School Midnighters is very much a family film. It is bright and colourful and littered with unique characters that never appear clichéd. The animation is brilliantly done, but does rely too much on motion capture especially when presenting Kunstlijk. After School Midnighters was one of the very few CG animations screened at the Scotland Loves Anime film festival. This makes it feel like a breathe of fresh air when so much anime relies too heavily on traditional anime art styles. 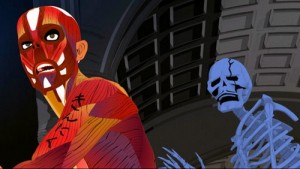