Indian novels are cacophonous: Vikram Seth’s A Suitable Boy is enormous, with almost as many characters as it has pages; Salman Rushdie’s Midnight’s Children is like a riotous street party; Allan Sealy’s The Trotter-Nama tells one family’s story, yet finds itself hopelessly tangled up in endless others. As Seth jokes: when is an Indian novel not a family saga? 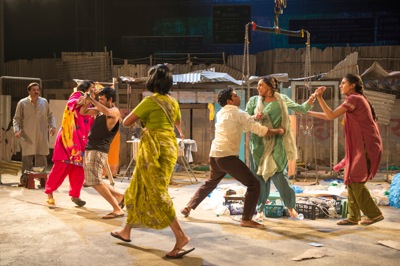 American journalist Katherine Boo’s Behind the Beautiful Forevers is no exception. And neither is David Hare’s stage adaptation for the National Theatre. Set in Annawadi slum in Mumbai, no artifice is needed to weave together the lives of its large cast; removing just one of their rickety shacks would set the whole lot tumbling down like dominoes. At the heart is Zehrunisa (played by Meera Syal), a hard-nosed businesswoman whose foul-mouthed diatribes embarrass her less gusty daughter and dreamy son. Sitting centre stage in a pool of milky moonlight, wearing an incongruously white shirt as he sorts surprisingly clean rubbish, Abdul is cast as our Romeo, our Oliver, our hero. The prize sorter of the slum, he’s the neighbourhood’s golden boy. He’s pining for no Juliet, but a better life; but then, aren’t they all?

Scene by scene, new characters step into the spotlight to tell their story. Teenage scavenger Sunil considers turning to crime to catapult him out of the slum. Asha, the fixer, refuses to filter government funds towards her crippled friend for his bad heart. Why? That’s just not good business. Manju reads Mrs Dalloway by the tap, waiting for a flow not just of water but also inspiration. What kind of a story is this? she wonders. All the woman does is buy flowers for a party.

These novelistic interludes build up a patchwork of interconnected hopes and desires. Everyone has a dream; few are ever realised. In this, perhaps stagey way, David Hare has adapted Katherine Boo’s novel for performance. This is social realism onstage. The true stench and grime of the slum is censored for us – when Manju meets her friend for covert discussions about books in the squat loos, they are as sparkling white as in a Daz advert – but we glimpse the sheer complexity and multitude of people and problems in Annawadi. In two and a half hours, could we expect much more?

It’s too easy to view the poor as a mass. It always has been, for those on the other side of the Beautiful Forevers (the advert on the huge billboard hiding the slum from the airport, and separating consumerism from its consequences). That’s what social realism is about; Dickens gave an, albeit stereotyped and caricatured, character to the masses – suddenly the street urchin was Oliver, the prisoner was Little Dorrit, the cripple was Tiny Tim – and became that little less easy to ignore. Katherine Boo spent three years living in Annawadi; the characters in her book are real individuals, with real problems.

Refreshingly, the strongest, wittiest characters are the women. Both Zehrunisa and Asha support useless husbands; Manju stands firm by her principles; the tough-skinned policewoman, lawyer and judge take no mercy.

In comparison to the sensual assault of song, dance, colour and character of a bladder-bursting Bollywood movie, Behind the Beautiful Forevers seems almost pared back. The set is as simple as a slum-dweller’s shack and as bare as a government funded hospital might really be. At one point, a giant silhouette of a plane swoops overhead deafeningly, with an accompanying sense of claustrophobia and danger; any day, the slum could be bulldozed to save tourists’ eyes from an unsightly scene. At another, rubbish comes raining down on the slum like longed-for typhoon rain. The closest we get to a song and a dance is a funeral lament.

Bringing the gritty reality of life in a slum to stage was never going to be easy. For starters, the sheer smell and squalor described in Boo’s book would make for far more unpleasant viewing than reading – and sometimes reality has to take a hit to sell tickets. At points, seeing misery thesped up feels uncomfortable, but thankfully these characters are not shown in Dickensian dimensions; they might be poor, but some are still horrible; others are corrupt, yet almost admirable; and they’re almost all out to get each other if it means improving their family’s life. Poverty might have drained some of the colour from this production’s set; but it certainly hasn’t from the storyline. Behind the Beautiful Forevers is as intriguing a family saga as the best Indian novel, and eye-opening and challenging to boot.

by Amy Lewin who attended an early performance of the show. You can follow Amy on Twitter at: @amylew27