Blood – C The Last Dark is the theatrical follow up to the Blood – C anime series that has only been available in the UK through an online anime streaming service. Created by the celebrated animation house Production IG (Ghost In the Shell, Blood The Last Vampire), the animation is as impressive as the gore and violence.

Despite following on from a series, the content is easy to appreciate even if this is your first experience of the characters and the setting.  The style and action are all presented well on the big screen, with the visuals and design filling the screen, further distancing itself from its tele-visual source material.

We begin in a Tokyo Subway where the “Elder Bairn” are intent on devouring humans. Blood – C The Last Dark tells the story of a vampire hunter by the name of Saya Kisaragi. Saya handles the Elder Bairn monsters in a spectacular violent style that draws attention to herself and causes a conflict that somewhat drives the story.
Saya then befriends a group of computer hackers called SIRRUT who aid her in dealing with her nemesis by the name of Fumito Nanahara. This is all set within the backdrop of a government imposed “Youth Ordinance Bill” – Internet access is restricted and curfews are in place.

The story itself is somewhat clunky and cumbersome, with the supernatural and violent tone driving the animation forward, as opposed to characterisation and narrative. Having said this a spectacular and extravagant conclusion does seem fitting and in keeping with the gore and horror that the audience witnessed for the duration of the anime. 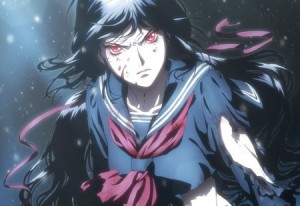