If you were looking for a flattering portrait in the 18th century you didn’t turn to Jean-Étienne Liotard. He committed to paper whatever he saw, double chins, missing teeth and all. And (unfortunately for some of his sitters) his ability to set down what he saw was remarkable. There was no hiding from his searing observation; he once refused to draw a woman as she was wearing too much makeup. This commitment to realism doesn’t seem to have reduced the queues for his services. A new exhibition of his work at the Royal Academy is full of portraits of European and British Royalty. The show reveals a few limb proportions askew here and there but Liotard could render faces with remarkable verisimilitude. 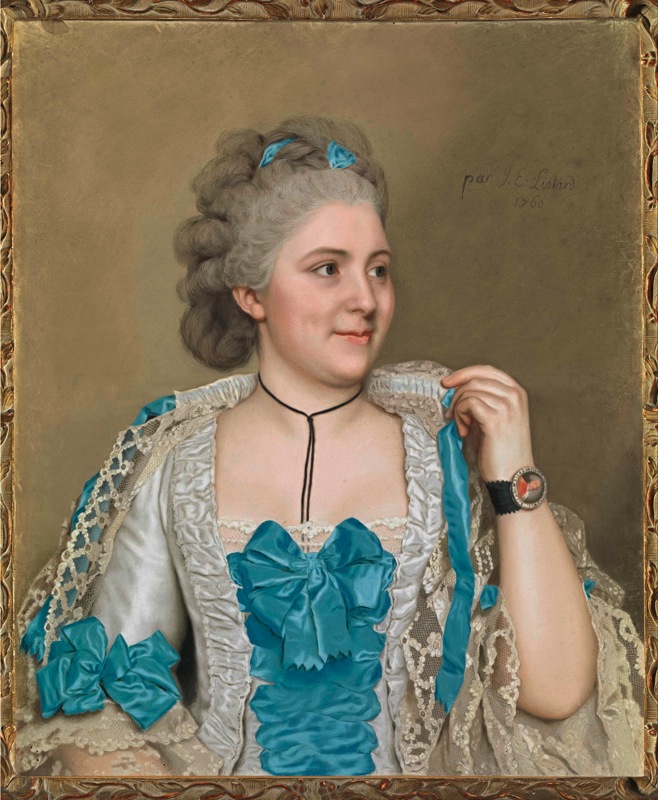 Born in Geneva, Liotard was a peripatetic fellow who worked in Constantinople, major European capitals and several royal courts. He was an eccentric, continuing even in Europe to wear the unusual garb he had taken to whilst in the East.

He did work in oils but this exhibition is mainly composed of his pastel work. Pastel was all the rage in 18th century France, right up until the time all the patrons had their heads chopped off. The medium fell out of favour for being associated too closely with the Ancien Regime. (Liotard died in 1789 but he died in Switzerland rather than the Place de la Concorde). Though he provided excellent pastel snapshot of his clients, his best work is done in enamel miniatures. His stunning skill is particularly seen in a profile self-portrait set against a white background where his control is remarkable.

Pastels are hard to conserve and prone to damage so for the RA to have attracted over seventy loaned images is something of a coup. Immediately noticeable in this exhibition is the number of sitters who are smiling, or at the least have a smirk on their faces. Getting your portrait drawn by Liotard appears to have been an amusing experience. Most of these people would have adored 21st century life. You feel they are engulfed in the cult of me and would have loved to use Instagram to post selfies to their friends. Human vanity hasn’t changed – Liotard has painted Julie de Thellusson-Ployard with a miniature of her husband on her wrist, a perfect example of an 18th century smart watch screensaver.  The miniature on her arm seems to be the wrong way round for her to see it, but maybe it has an 18th century version of the auto-rotation software in current smart phones and will re-orientate when she lowers her arm. It sounds fanciful but this was the Enlightenment.

One of the best pastels in the show is not of a over-preened subject but of the five year old Princess Louisa Anne in 1754. Looking ever so frail it is the sort of image that if you took as a photo you’d try again, asking the child to smile this time. But Liotard has used this moment of uncertainty and confusion to create an image that much better captures the fears and apprehensions of childhood.

These are candid, enlightenment portraits. Most have survived in superb condition, the blues surviving especially well, although the dark red of one jacket has gone missing. There is an element of the production line to seeing so many pastel portraits of the the same size and same plain background one after the after. ‘Next!’ you can imagine Liotard shouting as one client exited stage left and another immediately took their place. It certainly wasn’t as easy as pressing snap on your phone. But it looks like he – and his sitters – had great fun doing it.

Have you seen the show? What did you think?