Satire can be hilarious, but it usually works in the moment, as a comment about a current event. Move on to a time when that event has been forgotten and it loses its power. That is true of cartoons from last week’s newspapers but is multiplied for works created in the 18th century.

The second exhibition at the Queen’s Gallery (see here for Masters of the Everyday: Dutch Artists in the age of Vermeer) is High Spirits: The Comic Art of Thomas Rowlandson. A popular caricaturist from the turn of the 19th century he was classically trained artist, albeit the sort who would use a pea-shooter in the life room to annoy the model and ruin their pose. That lack of seriousness directed him towards cartooning, happy to make work with no pretensions to being a ‘fine artist’. 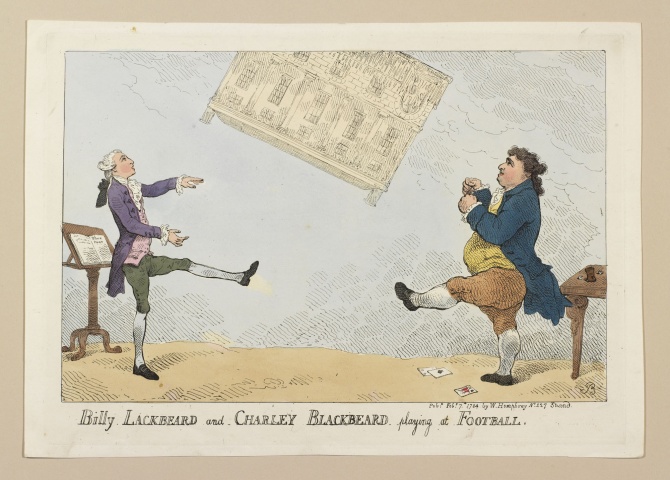 Rowlandson (1756-1827) was successful, working with a fast, descriptive line in a time when there was corruption aplenty to mock. His pictures show Georgian society and politics from the back window. They are paparazzi images that he didn’t have to wait behind a hedge to snap but could sit down and make up as he pleased. A duchess is rumoured to kiss butchers to get their votes for her man? Just draw it happening and the rumour grows. His works do not usually depict people as they would have liked to be remembered, although Rowlandson was a pen for hire and had no problem working for the Prince Regent to create propaganda. His images weren’t disseminated in newspapers but sold in print shops, so the Prince could collect them to get them off the streets and out of other collections. Hence their appearance in the Royal Collection.

The gallery has recognised that to appreciate the prints even slightly you need an idea about what’s going on and who the main characters are. To help explain who is who and what the scandals were that the cartoonist was referring to they have commissioned an excellent short animation (see above). Made from Rowlandson’s drawings this explains something of the characters and stories that turn up in the show. It doesn’t have the historical value of the original images but you’ll probably find it funnier than anything on the walls.

Even if you invest the time and approach the images with some of the necessary topical knowledge you will be hard pushed to even snigger. Technically the cartoon as a medium had not yet been pared down enough. Nowadays the best examples are minimalist masterpieces combining drawing and a few words. In Rowlandson’s work some of the works have so much text – written in a manner that is so hard to read – that it’s hard to see how it was ever funny. Maybe as there was so much less media of any sort it really was easier to make people laugh. Look, so-and-so has been drawn in a manner that makes him look particularly fat! was probably amusing the first time, but it has certainly lost its power  to raise a smile.

How humour has changed is the main take-home point from this show. Rowlandson’s style is attractive and slightly silly, but this far from the event the images are resolutely unfunny. It is an alternative glimpse of British history, but even if you know the ins and outs of the Duchess of Devonshire’s relationship with Charles Fox or the reasons why the Duke of York had to resign your sides won’t be splitting.