As the nation stood still for 2 minutes to commemorate those that have died fighting for the country, ten sculptures, responding to the idea of conflict, captured the entrance of the former Eurostar terminal at Waterloo. 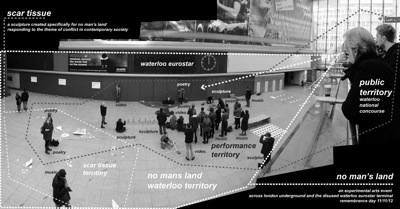 The sculptures were created specifically for no man’s land, an experimental live art performance event which was held across 10 London underground stations as well as Waterloo International on Remembrance Sunday 2012.
Musicians, poets and film-makers were dispatched to perform and record specially commissioned pieces live in the Underground tunnels, whilst the sculptures, originally intended to accompany the performers in the tube, were installed in the vast empty space below the mainline concourse at Waterloo.
The Underground had decided at the last minute against exhibiting the pieces due to concerns about congestion in the busy tunnels, but luckily the sculptors were thrown a last-minute lifeline by BRBR, the company owning the disused Eurostar terminal.
The performers congregated at Waterloo to rejoin their compatriots in creating an impromptu delivery of music and poetry amongst the installations created. The sculptures include new works by Natasha Reid, Lenka Horakova, Patricia Mulligan, Ben Burtenshaw, Maria Alvarez Echenique, Jonathan Lockwood, Dawn Cole, Paul Halliday and Aziz Anzabi. 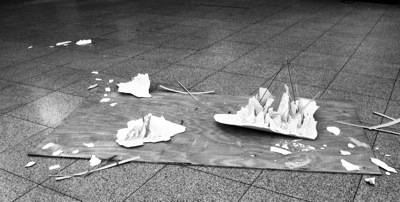 Natasha Reid’s sculptural installation, Scar tissue, was created in the 24 hours before the event, adapting an initial proposal for the tube into something more ambitious to respond to the vast new site. The pieces, constructed from twisted fragments of broken plaster and shards of plywood, reflect upon the emotional condition of displacement following conflict.
https://www.natashareid.co.uk/no-mans-land—london-underground—-november-2012.php
No man’s land was created by Platform-7, to invite the public to consider why we all hold the opinion we do on conflict and war. Seven months in the development, the event explores how European societies of 1912 walked blindly into the Great War of 1914-18, taking much of the world with them. Using conceptual live art performance and sculpture, the event has been created to examine bureaucracy, hierarchy, communication and how society creates major ‘events’.
https://www.no-mans-land.me/