Shoreditch has a rep for being cool, but I didn’t realise they ski and snowboard here whilst the rest of London complains about the cold. So it was last weekend, when the O’Neill Shoreditch Showdown hit town. 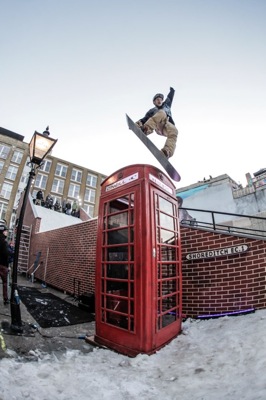 A 50 tonne snowfall transformed Old Street’s graffiti clad Red Market to showcase the best of the UK’s skiers and snowboarders. The crisp November evening saw our home-grown lads turn up in force and impress spectators with an incredible show that has well and truly raised the benchmark of British street riding. 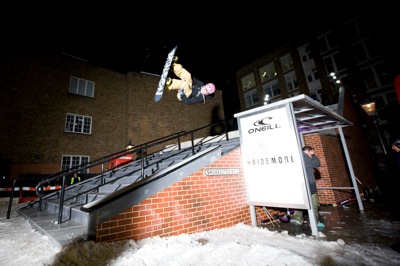 The 24 man open jam that included best tricks on the bus stop, rails, post box and telephone kiosk culminated in an epic head to head final. Impressing the judges it was Sparrow Knox for snowboard and Tylor J Harding for freeski. With a clean frontside 270 to switch boardslide on the rail styled out with a tap on the red post box, Knox was pretty humble about his win; “I just like to ride, we were all here as mates, I totally didn’t expect to win. It was a great format and a mad set-up.” Meanwhile for freeski 17 year old TJ Harding killed it all night long culminating with a 270 on revert 270 off the rail. Stoked with his win Harding said “It’s something special to win in a place like this, completely unexpected. A great way to set up for the winter.” 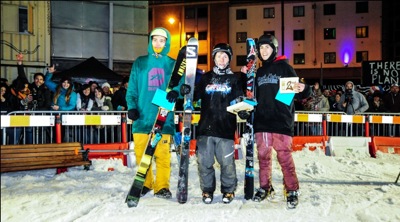 Event MC Christian Stevenson AKA DJ BBQ said “this was the best inner city rail jam I’ve ever had the chance to MC and certainly the first time I’ve ever seen a snowboarder jib a post box.” The insane level of riding was accompanied by a live VJ set that integrated some of the most memorable Brit pop culture events of the last 50 years.

Accompanying the ‘trip down memory lane’ show reel, a live graffiti installation took prime position next to the post box, adding the artistic authenticity that Shoreditch is famous for. As the floodlights slowly dimmed it was evident that this East London event had delivered on its promise to create a truly memorable night, celebrating the world class ski & snowboard talent that is coming out of the UK. With events like this happening in the country’s capital who needs a mountain?!