The original London Group artists were very forward-looking, but their shows almost certainly didn’t include QR codes, iPads and inkjet on acetate and paper. Nevertheless there are plenty of working methods that the founders would recognise in this exhibition that celebrates the group’s centenary. Showing at the Cello Factory in Waterloo until 13th December it is not a typical group show where members submit any piece they like. Instead it is a response to an exhibition across town at the Ben Uri Gallery called ‘Uproar! The first fifty years of the London Group‘ which has gathered together some of the masterpieces by early members of the group, from Vanessa Bell to Euan Uglow. 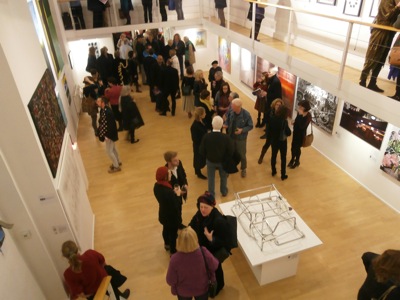 The London Group exhibition at the Cello Factory

Current members of the London Club have selected a work showing in the that exhibition, and responded it to it in any way they wish. These new works make up this latest group show, which means the Cello Factory is filled with a wide range of media and styles, hung on both levels of the double height gallery space.

Over fifty works are on display and the responses to the original works come in a large range of forms. The link can be through subject matter, such as David Theobald’s updated digital take on Stanislawa de Karlowska’s image of mundane urban life 100 years ago. There can be a formal inspiration, as with Tommy Seaward’s fascination with Kenneth Martin’s methodical, mathematical rigour. It can even be a shared investigation of found objects and mutilation, which links Jacob Epstein’s Rock Drill and David Redfern’s The Light, The World.

Some works have been chosen several times, noticeably Henri Gaudier-Brezeska’s Bird Swallowing a Fish, and Ivon Hitchens’ Red Spring. Barbera  Hepworth’s Mask from 1928 has inspired two works, one by Marenka Gabeler and one by Eric Fong. Although the results are both photographs they demonstrate how given the same starting point artists will always reach different conclusions. Gabeler focuses on the way a mask removes expression and investigates how this affects communication. Her piece documents a performance where she wore a mask for two weeks, experiencing the loss of identity for herself. Eric Fong’s take on Hepworth’s mask is more haunting, reminding of the masks we all build up to hide our feelings and the disfigurement that can hide behind the most attractive faces.

If you want to see the Ben Uri Uproar show on which this show is based you can get information on how to visit here. More details about the London Group show at the Cello Factory can be found here. It is accompanied by a programme of events, including a harpsichord recital and a children’s drawing day.

The show is on until 13th December.

Win a copy of David Redfern’s book, ‘The London Group: a history 1913-2013? . Not just a history of the Group, it puts each year’s exhibition in context with world events and artistic developments around the globe. You can buy a copy here, but to win a copy just email win@flaneur.me.uk with LONDON GROUP in the title, or follow @Flaneurzine on Twitter and tweet us with LONDON GROUP in the tweet. We’ll chose a winner at the end of November.