Today in South London a Barbara Hepworth public artwork has been stolen. 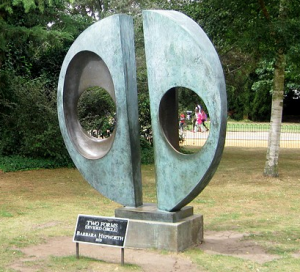 For aesthetic reasons? Does the thief want to put Two Forms (Divided Circle) in their back garden and look at it all day? No, it has been stolen, the police believe, to be melted down and sold as scrap metal.

Peter John, the leader of Southwark council has described the theft as ‘devastating’. This only begins to describe the feelings when a work of art by one of the country’s top sculptors is stolen to be liquified. Is the UK entering a period of New Barbarism, akin to the destructive Vandals that swept through the Roman Empire?

Compulsory Fine Art education for all

Would this have happened if art education was more highly regarded? Should the message be, educate the people. When people know their Manets from their Monets and their Mamets would they still be willing to stoop to this level? Should art galleries be forced to loan their works to the populace? If every household held a work of art of captivating beauty or meaning would outrages such as this still happen?

Have you seen it?

It was seven feet high and when melted down may only be worth £750. Have you seen it?