For years we have craved city centre electric car racing and at last the details of the first season of the FIA Formula E series have been released. This is motor-racing for a new generation, with concerts, qualifying and racing all on a Saturday between September 2014 and June 2015. There are races in cities around the world, including London! 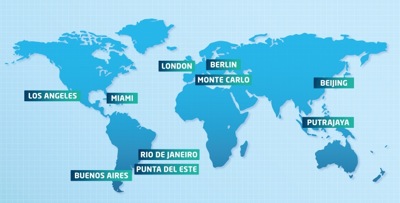 The season will consist of 10 city-centre events spanning four continents.  Beijing will host the world’s first ever fully-electric race on 13th September 2014.

After the opening round in Beijing, the 10 teams and 20 drivers will remain in Asia for Round 2 with Putrajaya, the federal administrative centre of Malaysia on 18th October 2014. Round 3 will see the championship head to Rio de Janeiro, replacing Hong Kong which will instead be considered as a candidate city for the following Formula E seasons.

From here, the series continues in South America with Round 4 in Punta del Este, Uruguay, on 13th December 2014 before starting the New Year in Buenos Aires, Argentina, for Round 5 on 10th January. The championship then heads to North America for Rounds 6 and 7 with Los Angeles on 14th February 2015 and Miami now brought forward to 14th March 2015.

The season then moves to Europe for the final three rounds beginning with Monte Carlo, Monaco, on 9th May 2015 followed by the German capital of Berlin on 30th May 2015 where the former airport of Tempelhof has already been revealed as the circuit location. The inaugural season then reaches its climax in London, United Kingdom, on 27th June 2015.

The ten locations will provide unique, recognisable backdrops to showcase the new generation of electric cars. Tickets will go on sale in 2014.