Even in the indie-ist of indie films and the offy-ist of off-Broadway dramas opticians and librarians rarely get big roles. Hollywood super-villains are rarely evil opthalmic surgeons and Quick! To the library is not often heard on stage at the National Theatre. The sincere Borges and I addresses this discrimination by telling of South American librarian Jorge Luis Borges. Head of the Argentinian National Public Library he was also a prize-winning writer, sharing the 1961 Prix International with Samuel Beckett. Born in 1899, by the time he was 55 he was completely blind, writing by dictation and unable to read. He was also running an organisation with access to 800,000 books. 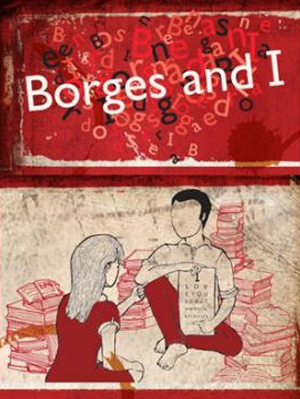 First performed at the 2009 Edinburgh Fringe, Idle Motion’s play was such a success that the company decided to turn professional. Developed further in the intervening years Borges and I has been showing at the New Diorama, an excellent London venue that supports original and less-commercial projects.

Episodes from Borges’ life and work are partnered with the more rowdy exchanges of a contemporary book group. The six actors play distinct characters in the Culture-Show-like discussions, most memorably Grace Chapman’s overbearing Hilary, who gives new members a membership pack, including dos, don’ts and some of her own creative writing. How she hasn’t fired Julian Spooner’s laid-back Jim from the group is remarkable, given he turns up to one meeting having read the wrong book. She has a cutting line in put-downs, finding one book they are reading ‘…very three for two.’  Sophie, played by Sophie Cullen finds she cannot read the books quickly enough – like Borges himself she is sliding into blindness. After an awkward romance, newcomer Nick (Joel Gatehouse) helps her with her changing life.

The title might suggest a literary Withnail spoof, but it comes from one of Borges’ own short stories. From the start projections appear on a wheeled screen that will later divide, spin and become two bookcases. Books sit in small piles at the edges of the stage. Pages are thrown into the air and cover the floor. Literature is everywhere. It can transport you, it can become much more than just print on paper. At one point the actors combine to create a flapping flock of birds, each holding up a single book. Less successfully they also create an aeroplane out of books, each holding part of the fuselage and walking it across the stage. Here some of the books have been cut to shape which detracts from the image and underrates the transformative power of books.

Though it depends heavily on projection technology working properly, on stage Borges and I develops out of a failed powerpoint presentation on the writer being given by Kate Stanley’s Alice. The projector breaks, an umbrella opens and the players take over the stories of Borges and Sophie.  Carefully choreographed set pieces are interspersed with the recognisable bickering of opinionated readers. There are many visually rich moments and connections aplenty for the Borges expert to spot.

There is some slow-mo that could be sped up and there are some scenes that could be cut down – you may feel at one point that there is a valid reason why the optician has not become the favourite location of script writers. But overall Borges and I is an absorbing ensemble piece. It is a play for bibliophiles, though if you treat your books with great respect and only flick through them wearing gloves be warned. The results can be elegant but on this stage books get trampled on, chopped about and used as dominoes.

Books were harmed in the making of this play.