There are two lines of dialogue which crystallise all that is good about this gem of a film by director Todd Hayes and screenwriter Phyllis Nagy. The first comes from a close acquaintance of Therese Belivet (Rooney Mara) who when asked what satisfaction he could possibly derive from watching the same film six times in a row replied: “Right now, I’m charting the correlation between what they say and how they feel.” 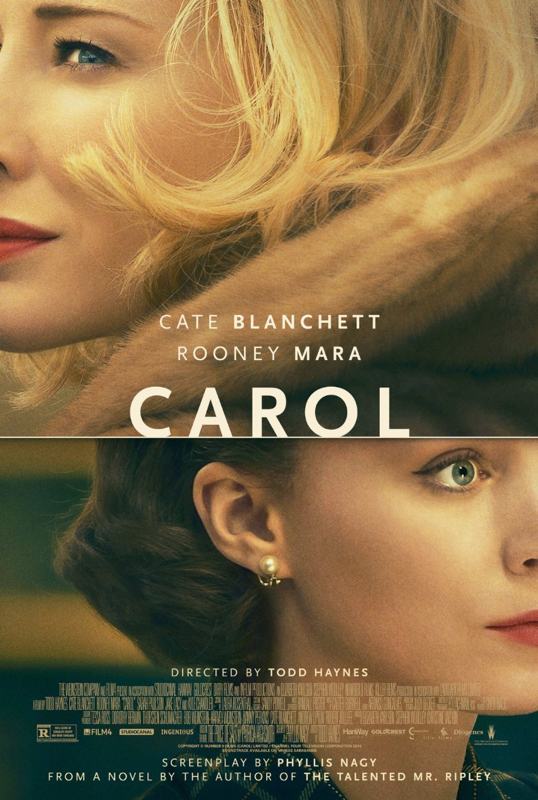 The second comes from Therese’s lover and soulmate Carol Aird (Cate Blanchett) who after a blazing row with her estranged husband Harge (Kyle Chandler) over custody rights of their daughter snapped: “Just when you think it can’t get any worse, you run out of cigarettes.” The unspoken and the uncalled for being two driving factors behind the movie’s success which has received universal praise from critics and public alike.

Mara and Blanchett are perfectly cast as the star-crossed lovers whose affections for one another are curtailed by society’s narrow definition of what constitutes a moral relationship and their finely nuanced performances offer a perfect counterpoint to one another’s characters. Therese, a retail assistant and amateur photographer who works in the Winter Wonderland Toys section of Frankenberg’s department store, is blue collar and green behind the ears when it comes to sex and relationships.

Whereas Carol, a rich divorcee with high tastes and a low boredom threshold, has been there, seen it and worn the ring. For example, when a judge threatens to prevent her from seeing her daughter if she continues to engage in “immoral” relationships with women – she also had an affair with her husband’s sister Abby Gerhard (Sarah Paulson) – she responds defiantly: “What use am I to her if I am living against my own grain?”

Everything about the film says class. From the casting and the performances to the direction and the cinematography. Not a word is wasted, not a silence over-egged. With each frame earning its keep and each sequence shaped to perfection. Especially Carol and Therese’s festive road trip from Manhattan to Iowa where they eventually consummate their relationship. Even humour pays a welcome visit in the form of the odd dry one-liner such as that issued by a travelling salesman who despite using his best chat-up lines gradually realises he is pissing against the wind: “I am doomed to remain without a sale.”

My only gripe (if you can call it that) is that I wasn’t as emotionally engaged by the film as I had hoped. Which is not really a criticism, more an observation of my own reaction and expectations. Sure, I was swept up by Carol and Therese’s undying love for one another and longed for the day when they could step out of the shackles of conformity and live their lives free from discrimination and shame. However, much like the characters who often had to suppress their true feelings while watching others express theirs freely, most of the time I felt like an observer. One step removed from action.

But my lack of feeling did not spoil my enjoyment of the movie one bit. If anything, it made me step back and appreciate the journey of the characters, the obstacles they had to surmount and the deep feelings they had for one another and couldn’t suppress – no matter how hard they tried. Carol will win awards. And it may win many. But the real success of the film is the creative ensemble led by director Todd Hayes and his two stars Cate Blanchett and Rooney Mara who have created a rare work of beauty.