Newton Faulkner’s newest album, “Human Love”, which reached #41 on UK music charts, and #82 in Ireland, after it’s release date of 20th November, is certainly a step away from his normal folksy sound, but as track 3 on the album indicates, perhaps this new sound could be a “Step In the Right Direction”? 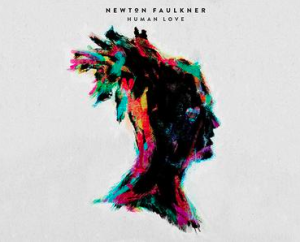 This new sound is accompanied by the severing of Faulkner’s characteristic ginger dreadlocks, as shown in the music video of his single “Get Free”, the first track on “Human Love”. This video is wholly comprised of Faulkner shearing his hair off, and if his new album is anything to go by, signalling a change of course in his music and image to something more popular and mainstream. Faulkner’s fanbase has steadily grown since the release of his debut album in 2007, and his fame is reaching new heights, echoed by the venues which he has lined up for his 2016 European tour, with bigger venues, such as 02 halls across the country, and slots from Paris to Milan.

Faulkner’s famous “Dream Catch Me” on his 2007 debut album “Hand Built by Robots” is characterised by throaty, melodious vocals and percussive guitar; a romance between man and instrument, which created the rustic sound that we identify with Newton Faulkner. For “Human Love”, Newton’s 5th full album, the quintessential low-key acoustic that Faulkner normally employs is still there, with emphasis still being placed on vocals and a percussive element on guitar, but the acoustic is augmented with drum beats and electronic pulses, potentially the introduction of other instruments. There is a generally buoyant feel to the album, which contrasts with the more somber and mournful theme of the vocal lines to create a passionate, modern, and polished folk sound.

Faulkner’s new contemporary sound certainly seems to be being recognised, as he released this latest album on the BMG label, as opposed to the Sony BMG sub-label Ugly Truth Records, which he used for his previous albums.

“Stay and Take”, the fifth track on the album, offers a collaboration with Dutch singer Tessa Rose Jackson, delivers a rhythmic beat, accompanied with a smooth vocal duet, and a catchy tune, something we haven’t often heard from Faulkner, but comes as a welcome surprise. In fact, the majority of songs on “Human Love” have something catchy about them, whether the energetic beat, the leaping vocals, or the rhythmic guitar strumming.
“Human Love” rises and falls throughout, going from mellow vocal and guitar melancholy of “Break” to the electronic and distinctly memorable “Shadow Boxing”. “Up Up and Away” is perhaps the most upbeat of all the songs on the album, and certainly has a good hook, if a little repetitive, and is accompanied by a similarly upbeat recently released music video.

Overall, “Human Love” by Newton Faulkner, whilst not mainstream enough to garner a spot in the top ten, is certainly worth a listen (or five), as a great, modern new album by an evolving musician.