The auditorium for the matinee of A Christmas Carol at the Pleasance was full of babbling school children – and a teacher who could silence them all with one bark. I want bags on the floor, not on your knees, she ordered the entire theatre. If I’d had a bag on my knees I would have strongly considered moving it. 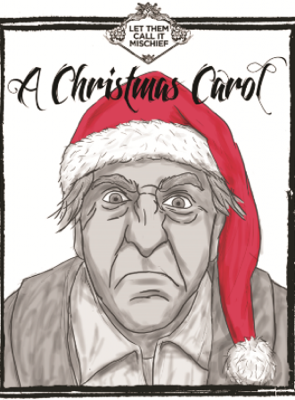 Dickens wrote his ghostly parable back in 1843 but its tale of redemption remains relevant, as does its belief in the possibility of change, even for bankers. A Christmas Carol has been adapted for the stage many times. Dickens himself re-edited the work and performed dramatic public readings of Scrooge’s experiences. The present adaptation is by Danny Wainwright, performed by Let them Call It Mischief. With added humour the plot follows the well-known story, viz. Scrooge the Meany is visited by three ghosts. They show him the results of his attitudes and behaviours. He has the chance to change and be transformed. Does he take it?

Maximising the comedic possibilities of the play the seven actors romp about the stage, playing over forty different characters in the ninety minutes, Elliot Ross in particular bringing an enjoyable cheer to the busy proceedings. Together they unleash song and dance routines that Dickens almost certainly didn’t perform in his public readings, including a medley of dance styles reminiscent of the Youtube hit Evolution of Dance.

Maxwell Taylor is the beaming, bow-tied narrator, who holds the show together – after starting proceedings reading from the wrong Dickens novel. He humourously interferes with the action, the actors struggling to keep up with his description of what is happening on stage. He argues with the characters, forgets to give some details. At one point he’s still backstage when needed.

Tiny Tim’s role is taken by an unusual actor – he probably doesn’t have much to say at after-show parties and is almost certainly the worst paid of the troupe. He’s got something of the frog about him – if you don’t know the story it must be confusing to see a puppet on stage.  It adds to the fun but reduces the sense of dire poverty that Scrooge’s actions are helping to create.

What engaged the children most? They enjoyed Alyssa Noble’s accidental water spillage and the subsequent, more careful fetching of another drink. They also loved answering rhetorical questions (What day is it? asks Benedict Waring’s genial Scrooge. Up shoot several hands). But most of all they enjoyed Robert Rowe, both dressed as a sparkly, rectangular Christmas present when playing the ghost of…Christmas Present, and wearing a white tutu and dancing with a wand. The British amusement at a man in a dress obviously starts young. The excitement (and subsequent chatting and shushing) peaked every time Marley’s ghost appeared in a blaze of lights and dry ice.

This isn’t a dry, Victorian tale focusing on the poverty of some and the nastiness of others but a celebration of redemption told with humour. Accessible to children, though they might need the story recapping afterwards, which is an issue as much with the supernatural plot as the production. You can imagine the questions the teachers were fielding on the walk home…

So those people were ghosts?

Why was he dressed as a Christmas present?

And probably most confusing of all for a small child, Why was that man holding a talking frog?

Find out at the Pleasance until 4th Jan 2015. (Careful if you take any sweets or the teacher might confiscate them…)