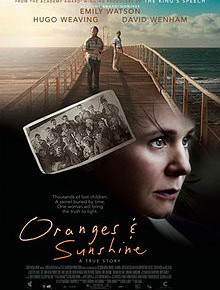 It will be news to many people that the Aboriginal people of Australia were not the only ones to have a stolen generation. Starting back in 1869, and continuing as late as the 1960’s, hundreds of thousands of children in the UK were separated from their parents and deported to Australia, Canada, New Zealand and South Africa. Though some were orphans, many came from families that the Government deemed ‘shameful,’ (i.e. births out of wedlock etc) and many were lied to, being told their parents were dead before shipping them off to British colonies where they were often used as slave labour and mistreated or abused.

This horrifying true story is told through the eyes of Margaret Humphries in Oranges and Sunshine, based on her book Empty Cradles. Humphries, a social worker from Nottingham, England, became aware of the scandal when a young woman approached her wanting help to locate the parents she had been taken from as a small girl. Beautifully and gracefully played by Emily Watson, the story documents how one woman took on the huge task of attempting to unite thousands of people with their families, and to somehow right an obscene wrong that had penetrated her country’s history. Fighting to get the government to take responsibility for their part in the mass deportation was seemingly impossible, and Humphries was also up against public slander and threats from organisations such as the Christian Brothers who were intimidated by the disgraceful expose.

Hugo Weaving plays the noble Jack, and David Wenham the cantankerous Len, two former child migrants that Humphries took under her wing. Weaving, gentle but disturbed, gives a heartbreaking performance, earnestly wanting resolution after missing his mother for a lifetime. Wenham, loathsome at first, later also becomes a heart-winning character. Personifying the familiar, obnoxious Aussie bloke, his impenetrable personality is transcended as we learn of his childhood, working on scorching hot fields in bare feet, and lifting rocks half the size of his body to build the Stations of the Cross for the Christian Brothers.

The ever-growing mass of people wanting help from Margaret Humphries never stopped, and inevitably took a toll on her personal life. The intersection between the social worker and the woman who was a mother and family woman is poignantly balanced; Watson carries the role with great dignity.

Director Jim Loach also beautifully depicts his Australian and English settings, using reverent attention to details such as afternoon birdcalls, whispering gum trees, and the bleak stockiness of suburban Nottingham. The contrast between the two reinforces the displacement of young children from home to what must have seemed like another planet – and a horrible one at that – robbed of family and made to work relentlessly. “It can’t always be this hot, can it?” recalls Len, of the moment he stepped off the boat in Australia as a toddler. The trauma, both mental and physical, that many child migrants were put through is bitterly but delicately documented.

An extremely meritorious picture, Oranges and Sunshine exposes a story just as shocking as the Aboriginal stolen generation. After escaping public knowledge for some two decades, this film is an important revelation about our complex white Australian heritage.